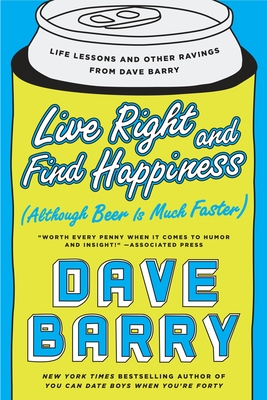 Live Right and Find Happiness (Although Beer is Much Faster)

Life Lessons and Other Ravings from Dave Barry

Now in paperback from the Pulitzer Prize winner, the hilarious New York Times–bestselling exploration of what generations can teach one another—or not.

During the course of his life, Dave Barry has learned much of wisdom, and he is eager to pass it on. Among other brilliant, brand-new pieces, Dave shares home truths with his new grandson and his daughter Sophie; explores the hometown of his youth, where all the parents seemed to be having un-Mad Men–like fun; and dives into firsthand accounts of the soccer craziness of Brazil and the just plain crazy craziness of Vladimir Putin’s Russia.

Praise For Live Right and Find Happiness (Although Beer is Much Faster): Life Lessons and Other Ravings from Dave Barry…

“Worth every penny when it comes to humor and insight. It’s wonderful to see that he hasn’t stopped writing about our foibles and his somewhat unique perspective on what makes us tick. And he’s able to do it while invoking out-loud laughter.” —Associated Press

“These latest essays will cause outright, prolonged laughter.” —Kirkus Reviews

“If you were on that clichéd desert island and could follow only one sage’s advice, it would have to be Dave Barry’s.” —Janet Maslin, The New York Times

From 1983 to 2004, Dave Barry wrote a weekly humor column for The Miami Herald, which in 1988 won a Pulitzer Prize for Commentary. He is the author of more than thirty books, including such bestsellers as the nonfiction Live Right and Find Happiness (Although Beer Is Much Faster), You Can Date Boys When You’re Forty, and  I’ll Mature When I’m Dead; the novels Big Trouble, Tricky Business, and Insane City; the very successful YA Peter Pan novels (with Ridley Pearson); and his Christmas story The Shepherd, the Angel, and Walter the Christmas Miracle Dog. Two of his books—Big Trouble and Dave Barry’s Guide to Guys—have been turned into movies. For a while, his life was even a television series, Dave’s World, but then it was canceled. The series. Not the life. For many years, Dave was also a guitarist with the late, infamous, and strangely unlamented band the Rock Bottom Remainders.
Loading...
or
Not Currently Available for Direct Purchase