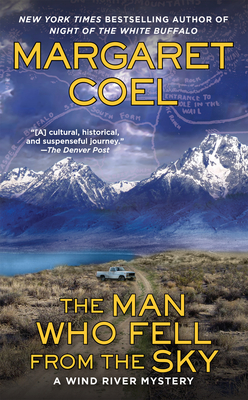 When Robert Walking Bear’s body is found in the Wind River mountains, his death appears to be accidental—except for the fact that he had been hunting for Butch Cassidy’s buried loot with a map he had gotten from his grandfather, a map believed to have been drawn by the leader of the Hole in the Wall gang himself.

It isn’t long before rumors circulate that Robert was murdered by his own cousins to get the map and find the treasure themselves. Despite there being no evidence of foul play, the gossip gains credibility when both Arapaho attorney Vicky Holden and Father John O’Malley are contacted by an anonymous Arapaho claiming to have witnessed Robert’s killing.

When one of Robert’s cousins falls prey to another deadly accident, Vicky and Father John are convinced the victim is the witness who confided in them, and the hunt for the killer is on in earnest—before more die in search of Cassidy’s cache.

“This newest Wind River mystery takes readers on a cultural, historical and suspenseful journey as Vicky and Father John get in over their heads in their attempt to keep the body count on the reservation from rising. The added mystery surrounding the fates of Butch and Sundance is a bonus.”—The Denver Post

Margaret Coel is the New York Times bestselling, award-winning author of the acclaimed Wind River Mystery novels featuring Father John O’Malley and Vicky Holden (Night of the White Buffalo, Killing Custer, Buffalo Bill’s Dead Now), as well as the Catherine McLeod Mystery series (The Perfect Suspect, Blood Memory) and several works of nonfiction. Originally a historian by trade, she is considered an expert on the Arapaho Indians. A native of Colorado, she resides in Boulder.
Loading...
or support indie stores by buying on