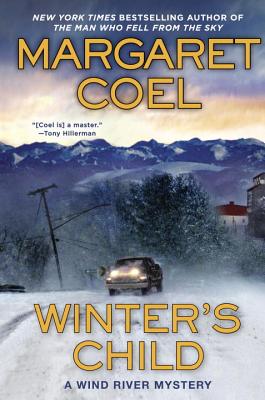 In the midst of a blizzard, Myra and Eldon Little Shield found an abandoned baby on their doorstep and brought her inside. Five years later, no one has come back to claim the little girl now known as Mary Anne Little Shield. But now that she’s old enough to start school, her foster parents fear social services will take her—a white child—away from them.

Determined to adopt Mary Anne, the Little Shields hire lawyer Clint Hopkins, who wants Vicky as cocounsel on the case. But before their meeting can take place, a black truck deliberately runs Hopkins down in the street.

Enlisting Father John to help investigate who would kill to stop the child’s adoption, Vicky unravels a connection between the five-year-old girl and a missing alcoholic Arapaho wanted for robbery—only to uncover one of the darkest secrets in Wind River’s history…

Margaret Coel is the New York Times bestselling, award-winning author of the acclaimed Wind River Mysteries featuring Father John O’Malley and Vicky Holden (The Man Who Fell from the Sky, Night of the White Buffalo, Killing Custer), as well as the Catherine McLeod Mysteries (The Perfect Suspect, Blood Memory) and several works of nonfiction. Originally a historian by trade, she is considered an expert on the Arapaho Indians.
Loading...
or
Not Currently Available for Direct Purchase