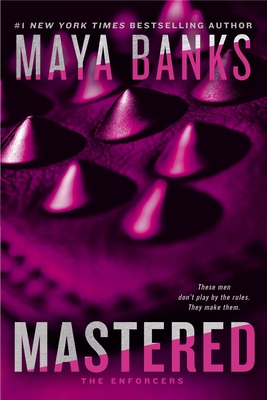 The #1 New York Times bestselling author of the Surrender Trilogy and the Breathless Trilogy knows what makes readers hot. Now she turns it up in Mastered, the explosive first book in a new series of a desire too dangerous to resist.

What he wants, he takes with no remorse or guilt.

She stood out in his club like a gem, unspoiled and untouched. A lamb among wolves, she clearly didn’t belong. Drawn to her innocence he watched as she was surrounded by men who saw what he did—but no one but him could touch her. He summoned her to his private quarters. He sensed her fear. He also recognized the desire in her eyes. And he knew she wouldn’t leave before he possessed her. She had no need to know his secrets. Not until he had her under his complete and utter control.

What he wants, she isn’t sure she can give him.

The moment he told her want he wanted, she couldn’t resist. Instinct told her to run, but her heart said stay and walk the fine line between pleasure and pain. Though she wasn’t sure she could ever completely surrender, the primal part of her wanted to try, even knowing this man could break her in ways she never imagined. Because once he possessed her, he owned her and it would be too late to turn back. She can only pray that he doesn’t destroy her in the end.


Praise For Mastered (The Enforcers #1)…

Praise for the novels of Maya Banks

“If you haven’t read this series yet, you totally should…Incredibly awesome…I love Maya Banks and I love her books.”—Jaci Burton, New York Times bestselling author

“Maya Banks…really dragged me through the gamut of emotions. From…‘Is it hot in here?’ to ‘Oh my GOD’…I'm ready for the next ride now!”—USA Today

“[A] one-two punch of entertainment that will leave readers eager for the next book.”—Publishers Weekly

“For those who like it naughty, dirty, and do-me-on-the-desk HAWT!”—Examiner.com

Maya Banks is the #1 USA Today and #1 New York Times bestselling author of the Surrender trilogy, the Breathless trilogy, the Sweet series, and the Colters’ Legacy novels.

She lives in the South with her husband and three children and other assorted babies, such as her two Bengal kitties and a calico who’s been with her as long as her youngest child. She’s an avid reader of romance and loves to dish books with her fans and anyone else who’ll listen!
Loading...
or support indie stores by buying on