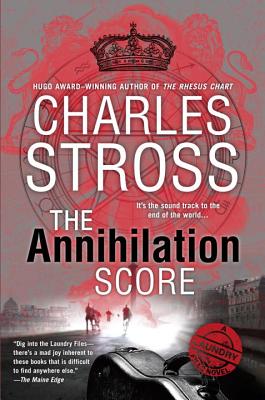 Mo’s latest assignment is assisting the police in containing an unusual outbreak: ordinary citizens suddenly imbued with extraordinary abilities of the super-powered kind. Unfortunately these people prefer playing super-pranks instead of super-heroics. The Mayor of London being levitated by a dumpy man in Trafalgar Square would normally be a source of shared amusement for Mo and Bob, but they’re currently separated because something’s come between them—something evil.

An antique violin, an Erich Zann original, made of human white bone, was designed to produce music capable of slaughtering demons. Mo is the custodian of this unholy instrument. It invades her dreams and yearns for the blood of her colleagues—and her husband. And despite Mo’s proficiency as a world class violinist, it cannot be controlled…

Praise For The Annihilation Score (A Laundry Files Novel #6)…

Praise for the Laundry Files Novels

“A bizarre yet effective yoking of the spy and horror genres.”
—The Washington Post Book World

Charles Stross, born in 1964, is a full-time science fiction writer. The author of seven Hugo-nominated novels and winner of three Hugo Awards for best novella, Stross has had his work translated into more than twelve languages. He has worked as a pharmacist, software developer, and tech-industry journalist.
Loading...
or
Not Currently Available for Direct Purchase