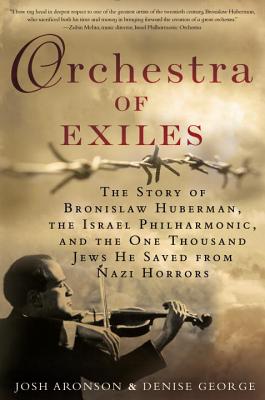 The Story of Bronislaw Huberman, the Israel Philharmonic, and the One Thousand Jews He Saved from Nazi Horrors

The compelling biography of the violinist who founded the Palestine Symphony Orchestra and saved hundreds of people from Hitler—as seen in Josh Aronson’s documentary Orchestra of Exiles.

“The true artist does not create art as an end in itself. He creates art for human beings. Humanity is the goal.”—Bronislaw Huberman

At fourteen, Bronislaw Huberman played the Brahms Violin Concerto in Vienna— winning high praise from the composer himself, who was there. Instantly famous, Huberman began touring all over the world and received invitations to play for royalty across Europe. But after witnessing the tragedy of World War I, he committed his phenomenal talent and celebrity to aid humanity.

After studying at the Sorbonne in Paris, Huberman joined the ranks of Sigmund Freud and Albert Einstein in calling for peace through the Pan European Movement. But when hope for their noble vision was destroyed by the rise of Nazism, Huberman began a crusade that would become his greatest legacy—the creation, in 1936, of the Palestine Symphony, which twelve years later became the Israel Philharmonic Orchestra.

In creating this world-level orchestra, Huberman miraculously arranged for the very best Jewish musicians and their families to emigrate from Nazi-threatened territories. His tireless campaigning for the project—including a marathon fundraising concert tour across America—ultimately saved nearly a thousand Jews from the approaching Holocaust. Inviting the great Arturo Toscanini to conduct the orchestra’s first concert, Huberman’s clarion call of art over cruelty was heard around the world. His story contains estraordinary adventures, riches and royalty, politicians and broken promises, losses and triumphs. Against near impossible obstacles, Huberman refused to give up on his dream to create a unique and life-saving orchestra of exiles which was one of the great cultural achievements of the 20th century.

Praise For Orchestra of Exiles: The Story of Bronislaw Huberman, the Israel Philharmonic, and the One Thousand Jews He Saved from Nazi Horrors…

“I hate to think what the cultural situation in Israel would be today without the tremendous effort of this great human being who was Bronislaw Huberman.”—Zubin Mehta, Music Director, The Israel Philharmonic Orchestra

“The remarkable story of the Holocaust-era formation of the Palestine Symphony Orchestra by famed, Polish-born violinist Bronislaw Huberman is engrossingly recounted.”—Los Angeles Times

“It was dangerous to be a good person in central Europe when Hitler was darkening the skies. Orchestra of Exiles salutes one of the people who dared to take that course, Polish violin virtuoso Bronislaw Huberman. In doing so, [it] reminds us that just as we must never forget the darkness, we also must never forget those who refused to let all the light go out.”—New York Daily News

“Orchestra of Exiles will interest anyone who’s concerned with European Jewry or classical music in the first half of the 20th century.”—NPR

“Richly researched...Orchestra of Exiles aspires to a level of primary research that other historical documentaries could take a page from.”—The New York Times

Denise George is an author, teacher, and world-traveled speaker who has written or co-written twenty-seven books, including Behind Nazi Lines, The Secret Holocaust Diaries, While the World Watched, and The Gentle Giant of Dynamite Hill. Denise has a heart for teaching and helping new writers. She is married to author Dr. Timothy George.

Josh Aronson is an Academy Award-nominated writer, producer, and director of films and documentaries, including Orchestra of Exiles, his documentary about Bronislaw Huberman, released in 2012. He has worked with Showtime, PBS, Discovery Channel, and others, and his films have won awards at festivals all over the world. He is also a concert pianist and regularly plays chamber music in New York and at the Telluride Musicfest, the chamber music festival he founded in 2002 with his wife, violinist Maria Bachmann.
Loading...
or
Not Currently Available for Direct Purchase