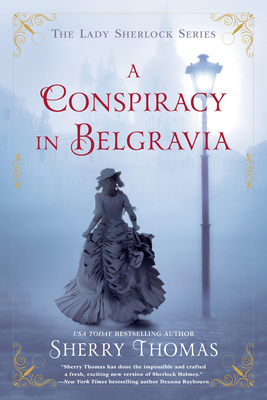 A Conspiracy in Belgravia (The Lady Sherlock Series #2)

Being shunned by Society gives Charlotte Holmes the time and freedom to put her extraordinary powers of deduction to good use. As “Sherlock Holmes, consulting detective,” aided by the capable Mrs. Watson, she’s had great success helping with all manner of inquiries, but she’s not prepared for the new client who arrives at her Upper Baker Street office.

Lady Ingram, wife of Charlotte’s dear friend and benefactor, wants Sherlock Holmes to find her first love, who failed to show up at their annual rendezvous. Matters of loyalty and discretion aside, the case becomes even more personal for Charlotte as the missing man is none other than Myron Finch, her illegitimate half brother.

In the meanwhile, Charlotte wrestles with a surprising proposal of marriage, a mysterious stranger woos her sister Livia, and an unidentified body surfaces where least expected. Charlotte’s investigative prowess is challenged as never before: Can she find her brother in time—or will he, too, end up as a nameless corpse somewhere in the belly of London?

Praise For A Conspiracy in Belgravia (The Lady Sherlock Series #2)…

Praise for A Conspiracy in Belgravia

“Thomas (My Beautiful Enemy) maintains the shadowy Victorian setting as she advances her marvelous take on the Holmes canon....A must for mystery/Sherlock fans and readers who love excellent puzzles.”—Library Journal (starred review)

“Loaded with suspense...a riveting and absorbing read...a beautifully written novel; you'll savor the unraveling of the mystery and the brilliance of its heroine.”—NPR.org

“A new adventure for Charlotte Holmes—the Victorian lady detective who poses as a man named Sherlock—brings old mysteries to light and buried passions to the fore....Readers of Victorian fiction, romance, and detective stories will each find something to draw them in.”—Kirkus Reviews

“Thomas’s use of language, the way she uses gender reversal to conceal revelations, and the intricacies of her plotting mean that I will rediscover more things to relish in A Study in Scarlet Women each time I reread it.”—NPR.com

“Sherry Thomas has done the impossible and crafted a fresh, exciting new version of Sherlock Holmes. From the carefully plotted twists to the elegant turns of phrase, A Study in Scarlet Women is a splendid addition to Holmes’s world. This book is everything I hoped it would be, and the next adventure cannot come too soon!”—Deanna Raybourn, New York Times bestselling author

“Sherry Thomas is a master of her craft, and A Study in Scarlet Women is an unqualified success: brilliantly executed, beautifully written, and magnificently original—I want the next volume now!”—Tasha Alexander, New York Times bestselling author

“Clever and absorbing. Thomas’s gorgeous prose and expert characterizations shine in this new incarnation of Sherlock Holmes. Readers will wait with bated breath to discover how Thomas will skillfully weave in each aspect of the Sherlockian canon, and devour the pages to learn how the mystery unfolds.”—Anna Lee Huber, national bestselling author

“Gender bending is just the first sign that unusual happenings are afoot in this origin story for a revamped Sherlock Holmes series by bestselling author Thomas...There is also a tantalizing, slow-burn love story between Holmes and a longtime friend befitting Thomas’s skills as a romance novelist....The ground has been laid well for future incidents in the professional and intimate life of Charlotte Holmes.”—Kirkus Reviews

“Author Sherry Thomas didn’t just insert Charlotte into Sherlock’s area of expertise, she made a character completely different from the well-known man. Cute and blonde, Charlotte doesn’t have Sherlock’s scorn for everyone. And because she is a lady in Victorian England, Charlotte has to be creative in her investigation in order to preserve the illusion of Sherlock Holmes to the man on the street and the police. The various characters introduced are quite interesting and the plotlines are great. This is the first in the new Lady Sherlock series, and if this is any clue, Charlotte and her continuing adventures will be thrilling to read.”—Suspense Magazine

USA Today bestseller Sherry Thomas is one of the most acclaimed historical fiction authors writing today, having won the RITA Award two years running and appeared on innumerable “Best of the Year” lists, including those of Publishers Weekly, Kirkus Reviews, Library Journal, Dear Author, and All About Romance. Her novels include A Study in Scarlet Women, first in the Lady Sherlock series; My Beautiful Enemy; and The Luckiest Lady in London.
Loading...
or support indie stores by buying on