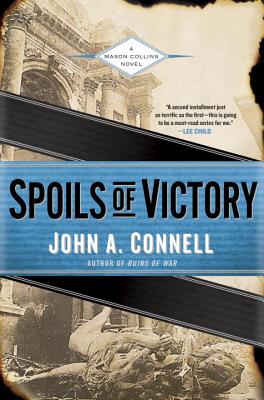 By John A. Connell

From the author of Ruins of War comes an electrifying novel featuring U.S. Army criminal investigator Mason Collins, set in the chaos of post-World War II Germany. When the Third Reich collapsed, the small town Garmisch-Partenkirchen became the home of fleeing war criminals, making it the final depository for the Nazis' stolen riches. There are fortunes to be made on the black market. Murder, extortion, and corruption have become the norm. It's a perfect storm for a criminal investigator like Mason Collins, especially when his friend, CIC Agent John Winstone, claims that a group of powerful men are taking over the lucrative trade. But before he can fully explain, Winstone--and his girlfriend-- are brutally murdered. Determined to uncover the truth, Mason plunges into a shadowy labyrinth of co-conspirators including former SS and Gestapo officers, U.S. Army OSS officers, and liberated Polish POWs. As both witnesses and evidence begin disappearing, it becomes obvious that someone on high is pulling strings to stifle the investigation--and that Mason must feel his way in the darkness if he is going to find out who in town has the most to gain--and the most to lose...

John A. Connell is the author of Ruins of War, and has worked as a cameraman on films such as Jurassic Park and Thelma & Louise and on TV shows including The Practice and NYPD Blue. He now lives with his wife in Paris, France.
or
Not Currently Available for Direct Purchase
Copyright © 2020 American Booksellers Association