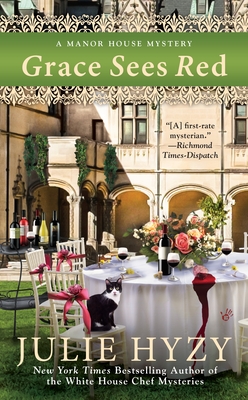 The New York Times bestselling author of the Manor House Mysteries and the White House Chef Mysteries is back with another nail-biting murder mystery for curator Grace Wheaton.

Grace Wheaton, curator and manager of Marshfield Manor, and her benefactor, Bennett Marshfield, are discussing how to help her roommates Bruce and Scott with their wine shop troubles when Grace’s trusted—if testy—assistant, Frances, calls, saying she needs some assistance of her own. Arriving at the address Frances has given them, they find a coroner’s van and police cars parked outside an upscale assisted-living facility called Indwell.

One of the elderly residents has been found dead under suspicious circumstances, and Frances, seen arguing with the man earlier that day, is now a person of interest. It’s up to Grace to clear her assistant’s name and find the real killer—before another Indwell resident checks out early...

“Fast-paced and full of behind-the-scenes information about how a former home turns into a public attraction. . . Hyzy’s books never fail to delight as the mystery holds your attention from the first word to the last.”—Kings River Life Magazine

New York Times bestselling author Julie Hyzy writes both the White House Chef Mysteries and the Manor House Mysteries for Berkley Prime Crime, and has won the Anthony Award and the Barry Award for her work.
Loading...
or
Not Currently Available for Direct Purchase