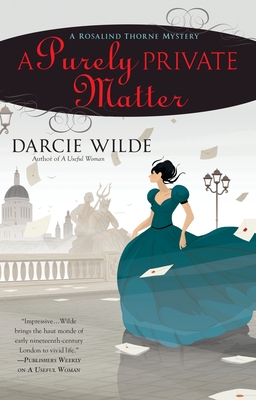 Rosalind Thorne has slowly but assuredly gained a reputation as “a useful woman”—by helping respectable women out of some less-than-respectable predicaments.

Her latest endeavor is a tragedy waiting to happen. Desperate Margaretta Seymore is with child—and her husband is receiving poisoned pen letters that imply that her condition is the result of an affair with the notorious actor Fletcher Cavendish. Margaretta asks Rosalind to find out who is behind the scurrilous letters. But before she can make any progress, Cavendish is found dead, stabbed through the heart.

Suddenly, Rosalind is plunged into the middle of one of the most sensational murder trials London has ever seen, and her client’s husband is the prime suspect. With the help of the charming Bow Street runner Adam Harkness, she must drop the curtain on this fatal drama before any more lives are ruined.

Praise For A Purely Private Matter (A Rosalind Thorne Mystery #2)…

Praise for A Useful Woman

“Clever and witty. Wilde artfully portrays Regency London, from its ballrooms to Bow Street, in all its glory and hypocrisy, and provides readers with a heroine worthy of our attention. With its colorful cast and scandalous intrigue, A Useful Woman would surely have set the famed patronesses of Almack’s atwitter.”—Anna Lee Huber, national bestselling author of the Lady Darby Mysteries

“[A] wonderfully entertaining Regency mystery romance, and I really enjoyed it. With a cleverly cunning plot and characters that are engaging and witty, I was easily enfolded in the dangers and subterfuge of the ton. Rosalind is a strong, determined character who knows what it is like to carry the world on her shoulders—very intelligent and savvy…With plenty of twists and turns, and romance thrown in to boot, A Useful Woman by Darcie Wilde is a delight to read, and I look forward to the next in the series.”—Fresh Fiction

“Wilde brings the haut monde of early nineteenth-century London to vivid life, and the characters she peoples it with are complex individuals whose basic decency, or lack of it, is carefully hidden behind a facade of manners and propriety.”—Publishers Weekly

Darcie Wilde is the author of the Regency Makeover Trilogy of eNovellas as well as A Useful Woman, the first novel in a Regency-set historical mystery series inspired by the novels of Jane Austen. Her book Lord of the Rakes was a 2014 Romantic Times nominee for Best First Historical Romance.

Visit her online at darciewilderomance.com.
Loading...
or support indie stores by buying on