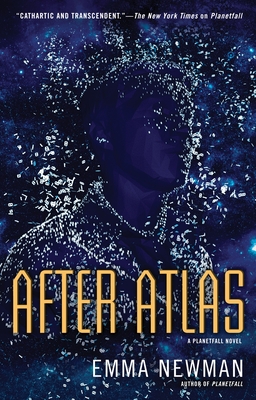 After Atlas (A Planetfall Novel #2)

Acclaimed author Emma Newman returns to the captivating universe she created in Planetfall with a stunning science fiction mystery where one man’s murder is much more than it seems—an Arthur C. Clarke Award Nominee.

Gov-corp detective Carlos Moreno was only a baby when Atlas left Earth to seek truth among the stars. But in that moment, the course of Carlos’s entire life changed. Atlas is what took his mother away; what made his father lose hope; what led Alejandro Casales, leader of the religious cult known as the Circle, to his door. And now, on the eve of the fortieth anniversary of Atlas’s departure, it’s got something to do why Casales was found dead in his hotel room—and why Carlos is the man in charge of the investigation.

To figure out who killed one of the most powerful men on Earth, Carlos is supposed to put aside his personal history. But the deeper he delves into the case, the more he realizes that escaping the past is not so easy. There’s more to Casales’s death than meets the eye, and something much more sinister to the legacy of Atlas than anyone realizes...

Praise For After Atlas (A Planetfall Novel #2)…

A Publishers Weekly Best Science Fiction/Fantasy Book of the Year

"Newman writes with exquisite precision of grief, divided loyalties, and the struggle for self-actualization in this noir-inflected standalone...Gripping and sorrowful."—Publishers Weekly (starred review)

"A lovely locked room mystery in which the stakes are incredibly high and the world is so very engaging....Emma Newman creates addictive page turners."—Starburst Magazine

"Newman combines the classic mystery-novel whodunit with a frighteningly possible reality of corporate-owned governments...The overall feeling of something more sinister happening keeps the pages turning until the unexpected conclusion."—Booklist

“Gripping, thoughtful science fiction in the vein of Tiptree or Crispin. Unique, timely, and enthralling.”—Seanan McGuire, author of Once Broken Faith

“A fascinating and propulsive tale.”—Locus

Emma Newman is the author of Planetfall, After Atlas, Before Mars, and the upcoming Atlas Alone and is also a professional audiobook narrator, narrating short stories and novels in all genres. She also cowrites and hosts a Hugo nominated podcast called “Tea & Jeopardy.” Emma is a keen role-player, gamer, and designer-dressmaker.
Loading...
or
Not Currently Available for Direct Purchase