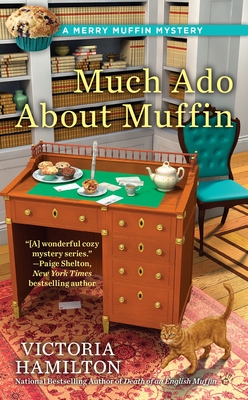 Much Ado About Muffin (A Merry Muffin Mystery #4)

In this fresh mystery from the national bestselling author of Death of an English Muffin, baker Merry Wynter comes to the aid of an innocent woman accused of murder.

Opera singer Roma Toscano may have a crippling case of stage fright, but she certainly is stirring up drama in Autumn Vale, New York, as she prepares for an upcoming performance at Merry’s Wynter Castle. With her flamboyant style and flirtatious personality, Roma attracts fans as well as critics, including the town’s postmistress—and Merry’s bitter foe—Minnie Urqhart.

But Roma and Minnie’s heated rivalry goes cold after Merry discovers Minnie dead at the post office. While every clue seems to be another ingredient in the investigation of Roma, Merry thinks the case is half-baked, and she’s eager to get her mitts on the real killer...

Praise For Much Ado About Muffin (A Merry Muffin Mystery #4)…

Praise for the national bestselling series

“[A] fun read, especially since the author successfully has stumped this reader again.”—Open Book Society

“Another engaging mystery with a fascinating locked-room angle, and an intriguing cast.”—Lesa’s Book Critiques

As Victoria Hamilton, Donna Lea Simpson is the national bestselling author of the Vintage Kitchen Mysteries, including No Mallets Intended and Freezer I’ll Shoot, as well as the Merry Muffin Mysteries, including Death of an English Muffin and Muffin but Murder. She is also a collector of vintage cookware and recipes.
Loading...
or
Not Currently Available for Direct Purchase