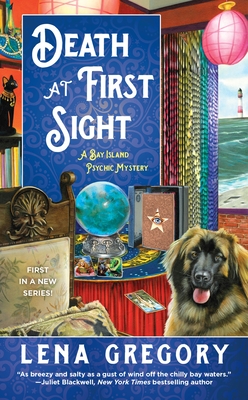 It doesn’t take a crystal ball to see that something’s not right on Bay Island...

Since she left her psychiatric practice in New York City to open up a psychic shop in her hometown on Bay Island, Cass Donovan has given her fair share of readings to conflicted customers. But what she sees in Ellie Callahan’s future doesn’t bode well.

When Ellie’s mother, Marge, publicly confronts Cass about the reading, the embarrassment makes her want to curl up and die. And when she later stumbles across Marge’s body—and is a suspect in her murder—Cass is suddenly the star of Bay Island’s rumor mill.

Cass is determined to prove her innocence and save Ellie from meeting the fate in her unfortunate vision. But even with the help of her friends Bee and Stephanie, Cass will have to channel some serious sleuthing instincts to find the real killer...

“As breezy and salty as a gust of wind off the chilly bay waters."—New York Times bestselling author Juliet Blackwell

Lena Gregory is the author of the Bay Island Psychic Mysteries.
Loading...
or
Not Currently Available for Direct Purchase