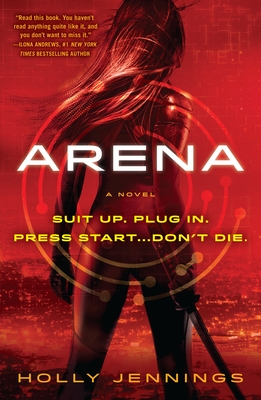 Every week, Kali Ling fights to the death on national TV. She’s died hundreds of times. And it never gets easier...

The RAGE tournaments—the Virtual Gaming League’s elite competition where the best gamers in the world compete in a fight to the digital death. Every kill is broadcast to millions. Every player leads a life of ultimate fame, responsible only for entertaining the masses.

Chosen to be the first female captain in RAGE tournament history, Kali Ling is at the top of the world—until one of her teammates overdoses. Now she’s stuck trying to work with a hostile new teammate who’s far more distracting than he should be.

Between internal tensions and external pressures, Kali is on the brink of breaking. To change her life, she’ll need to change the game. And the only way to revolutionize an industry as shadowy as the VGL is to fight from the inside…

“A stunning debut, fast-paced, action-packed, with an interesting romance and a compelling yet flawed heroine…Read this book. You haven’t read anything quite like it and you don’t want to miss it.”—Ilona Andrews, #1 New York Times bestselling author

“Depicting the action and excitement of virtual gaming that made Ernest Cline’s Ready Player One such a hit...Readers seeking more fast-paced sf about virtual reality will be pleased.”—Library Journal

“A nuanced and complex novel with a strong, imperfect heroine and a different approach to the ‘rebel in a dystopian society’ trope.”—RT Book Reviews

“With action-packed battle sequences and older computer-game references, [Arena] will appeal to fans of science fiction like Ernest Cline’s Armada.”—Booklist

Holly Jennings is a lifelong gamer who has spent innumerable hours playing World of Warcraft and Call of Duty. Arena is her first novel. She lives in Canada, where she is working on the sequel.
Loading...
or support indie stores by buying on
(This book is on backorder)