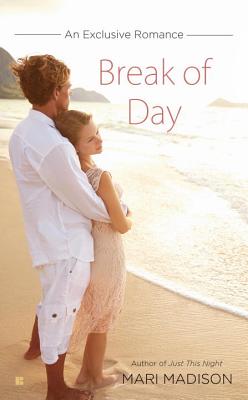 Break of Day (An Exclusive Romance #2)

From the author of Just This Night—

There’s a chance of a heat wave for the crew at News 9 San Diego...

Asher Anderson is an amazing surfer—with a body to match—but he’s pretty much the world’s worst weatherman. He’d prefer to catch the perfect swells in the morning so he tapes his forecasts in advance—it never rains much in San Diego anyway. The suits at News 9, however, would love to fire him, but since he’s the son of the station owner, they’ll just have to get creative...

Piper Strong thinks she’s scored her dream job when she’s promoted to weather producer. Glorified babysitter is more like it—she’s now responsible for bringing Asher back to shore. The problem is she’s afraid of the water, and she wasn’t counting on her growing attraction to Asher. But if Piper can just weather this storm, she'll be able to carve out a career to be proud of—and maybe even a place in her heart for love....

Praise For Break of Day (An Exclusive Romance #2)…

Praise for Just This Night

“It’s the kind of book that hits home and leaves you feeling hopeful, happy and full of love.”—Ever After Book Reviews

Mari Madison is a former multiple Emmy Award-winning television producer and author of novels for adults and teens. She’s worked at television news stations in Boston, San Diego, and Orlando and helped launch the nationally syndicated morning show Better in New York City. Under the name Mari Mancusi, she writes young adult books, including the Blood Coven Vampire novels, most recently Soul Bound and Bad Blood. She lives in Austin, Texas, with her husband and young daughter and their dog Mesquite.
Loading...
or
Not Currently Available for Direct Purchase