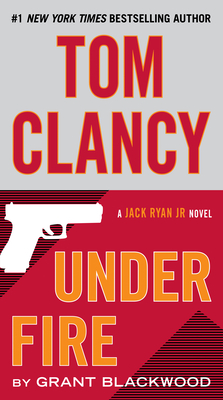 On a mission in Tehran, Jack Ryan, Jr., meets his oldest friend, Seth Gregory. As they part, Seth slips Jack a key, along with a perplexing message. The next day Jack is summoned to an apartment where two men claim Seth has disappeared with funds for a vital intelligence operation. They say he’s turned and leave Jack with a warning:  If you hear from Seth, call us. Do not get involved.

Jack soon finds himself lost in a maze of intrigue, lies, and betrayal where no one is who they seem to be—not even Seth, who’s harboring a secret that harkens back to the Cold War. A secret that is driving him to the brink of treason....

Praise for Tom Clancy Under Fire

“[A] strong addition to bestseller Tom Clancy's Jack Ryan series Praise for the bestselling novels of Tom Clancy...fans will be pleased to discover that in Blackwood's more than capable hands, Jack remains the all-American hero they remember.”—Publishers Weekly

Grant Blackwood is the New York Times bestselling author of the Briggs Tanner series (End of Enemies, Wall of Night, and Echo of War). He is coauthor of the #1 New York Times bestseller Dead or Alive, with Tom Clancy, and of the thriller The Kill Switch, with James Rollins. A U.S. Navy veteran, Grant spent three years aboard a guided missile frigate as an Operations Specialist and a Pilot Rescue Swimmer. He lives in Arizona, where he is working on his own stand-alone series starring a new hero.
Loading...
or support indie stores by buying on
(This book is on backorder)