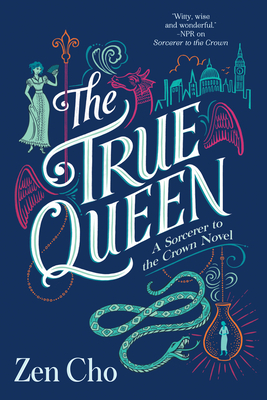 The True Queen (A Sorcerer to the Crown Novel #2)

In the follow-up to the "delightful" Regency fantasy novel (NPR.org) Sorcerer to the Crown, a young woman with no memories of her past finds herself embroiled in dangerous politics in England and the land of the fae.

When sisters Muna and Sakti wake up on the peaceful beach of the island of Janda Baik, they can’t remember anything, except that they are bound as only sisters can be. They have been cursed by an unknown enchanter, and slowly Sakti starts to fade away. The only hope of saving her is to go to distant Britain, where the Sorceress Royal has established an academy to train women in magic.

If Muna is to save her sister, she must learn to navigate high society, and trick the English magicians into believing she is a magical prodigy. As she's drawn into their intrigues, she must uncover the secrets of her past, and journey into a world with more magic than she had ever dreamed.

“A sheer delight from beginning to end. Cho perfectly conjures the opulence, absurdity and conflict of the period.”--Samantha Shannon, author of The Bone Season

“A delightful follow-up to Sorcerer to the Crown! Cho applies her characteristic wit and charm to a tale of cursed sisters – a story I found as enchanting as her Faerie Court.”--S.A. Chakraborty, author of City of Brass

“Cho continues to confront class and gender roles in an alternate Regency England while showcasing entertaining prose and characters. A delightful historical-fantasy novel that will capture readers in its layered story line.”—Booklist

“A joyous mash-up of Jane Austen and high fantasy.”—M.R. Carey, author of Someone Like Me

“Complex and rich – the sort of book that if it was a Masterchef dish, all the judges would be asking for more.”-- Genevieve Cogman, author of The Mortal Word

“Totally immersive, an utterly enjoyable experience. Here East, West and the Realm of Fairy meet: three vivid and vastly different societies steeped in the paradox of belonging and alienation. A story full of humour, heartbreak, and hope — Cho captivates once more.” --Karen Lord, author of The Galaxy Game


“Cho continues to confront class and gender roles in an alternate Regency England while showcasing entertaining prose and characters. A delightful historical-fantasy novel that will capture readers in its layered story line.”—Booklist


“Reading the clever deployment of weaponized manners never gets old; in Cho's charming prose, The True Queen weaves a very pleasant spell indeed.”--NPR
Praise for Sorcerer to the Crown
“An enchanting cross between Georgette Heyer and Susanna Clarke, full of delights and surprises. Zen Cho unpins the edges of the canvas and throws them wide.”—Naomi Novik, New York Times bestselling author of the Temeraire novels

“Absolutely everything about this book is delightful…Witty, wise and wonderful, Sorcerer to the Crown is an admirable achievement and a deep delight.”—NPR.org

“Sorcerer to the Crown felt like Pride and Prejudice but with magic and race, which makes Zen Cho Austen crossed with Susanna Clarke and Ignatius Sancho…I am utterly in love.”—tor.com

"A winning combination of magic and thrill set in an alternative version of Regency England."—The Washington Post

"A captivating debut that, aside from examining both gender and racial prejudice, tells an entertaining story with wit and consummate skill."—The Guardian (UK)

"Fans of Susanna Clarke's Jonathan Strange and Mr Norrell will flock to this historical fantasy debut for its shared setting and be rewarded with an exciting story and nuanced, diverse characters who make this novel soar on its own merits."—Library Journal (starred review; debut of the month)

"Combines magic and the Regency period in the manner of Susanna Clarke's Jonathan Strange and Mr Norrell, but adds an Austenian piquancy...Cho's debut has much to recommend it, particularly its implicit critique of colonialism and its frothy good humour."—Financial Times

Zen Cho was a finalist for the John W. Campbell Award for Best New Writer and her short story collection Spirits Abroad was a joint winner of the William L. Crawford Fantasy Award. Her debut novel Sorcerer to the Crown won a British Fantasy Award for Best Newcomer and was a Locus Awards finalist for Best First Novel. She lives in the UK.
Loading...
or support indie stores by buying on