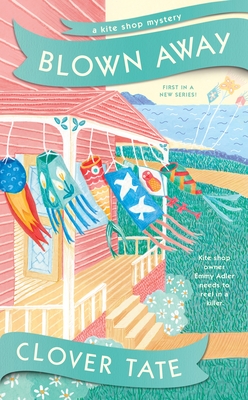 Blown Away (A Kite Shop Mystery #1)

In the all-new Kite Shop Mystery series set in the beachside community of Rock Point, Oregon, kite shop owner Emmy Adler gets swept up in a murder investigation.

Emmy is finally living her dream. She’s moved to the coastal town of Rock Point, Oregon, and is starting a kite business. Strings Attached features her own unique designs, inspired by everything from Picasso to Matisse’s colorful cutouts. Her spirits are soaring sky-high the morning of the grand opening—until she stumbles upon a dead man washed up on the beach.

The body belongs to local chef Miles Logan, and the gash across his chest indicates he’s been murdered. The sheriff suspects Emmy’s best friend, Avery, who used to date the chef. Emmy is sure Avery would never hurt anyone, but her pal doesn’t have an alibi for the night of the murder. With Avery’s freedom and the fate of her kite shop up in the air, Emmy takes it upon herself to follow the string of clues and solve the murder before the real killer takes flight.

Praise For Blown Away (A Kite Shop Mystery #1)…

Praise for Blown Away

“Emmy and her kite shop will blow you away!” —Fran Stewart, author of the ScotShop Mysteries

Clover Tate is a former congressional investigator and the author of Blown Away, the debut novel in the Kite Shop Mystery series.
Loading...
or support indie stores by buying on