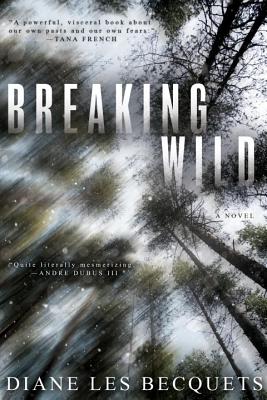 “Outdoor and adventure enthusiasts will rejoice in Les Becquets' debut novel. In the spectacular and unforgiving wilderness of northwestern Colorado, elk-hunter Amy Raye Latour goes missing in a snowstorm at the beginning of winter. A search-and-rescue operation is organized and ranger Pru Hathaway and her rescue dog go to look for the missing woman. With alternating chapters focusing on each woman, Les Becquets spins a thrilling story about two strong and mysterious female characters whose resourcefulness and determination help them tackle incredible adversity. Breaking Wild is an extraordinary adventure story whose ending is as tense and suspenseful as anything I have ever read.”
— Pierre Camy (W), Schuler Books & Music, Grand Rapids, MI
View the List

In captivating prose, Diane Les Becquets tells the story of one woman missing in the Colorado wilderness and another bent on discovering the missing woman's whereabouts, in an unforgettably moving and thrilling literary debut.

It is the last weekend of the season for Amy Raye Latour to get away. Driven to spend days alone in the wilderness, Amy Raye, mother of two, is compelled by the quiet and the rush of nature. But this time, her venture into a remote area presents a different set of dangers than Amy Raye has planned for and she finds herself on the verge of the precarious edge that she's flirted with her entire life.

When Amy Raye doesn't return to camp, ranger Pru Hathaway and her dog respond to the missing person's call. After an unexpected snowfall and few leads, the operation turns into a search and recovery. Pru, though, is not resigned to that. The more she learns about the woman for whom she is searching, and about Amy Raye's past, the more she suspects that Amy Raye might yet be alive. Pru's own search becomes an obsession for a woman whose life is just as mysterious as the clues she has left behind. As the novel follows Amy Raye and Pru in alternating threads, Breaking Wild assumes the white-knuckled pace of a thriller laying bare Amy Raye's ultimate reckoning with the secrets of her life, and Pru's dogged pursuit of the woman who, against all odds, she believes she can find.

Diane Les Becquets is a faculty member and former director of the MFA Program in Fiction and Non-Fiction at Southern New Hampshire University. In addition to teaching creative writing, she has worked as a medical journalist; an archaeology assistant; a marketing consultant; a sand and gravel dispatcher; a copywriter; and a lifeguard, and is also an avid outdoorswoman. A native of Nashville, she spent almost fourteen years living in a small Colorado ranching town before moving to New Hampshire.