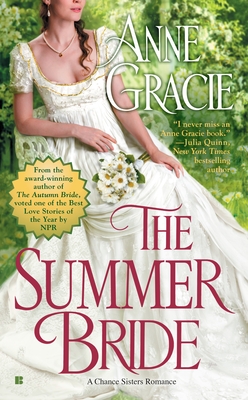 From the award-winning author of The Spring Bride comes the conclusion to the quartet about four sisters, four weddings, and a bride for every season...

Fiercely independent Daisy Chance has a dream—and it doesn’t involve marriage or babies (or being under any man’s thumb). Raised in poverty, she has a passion—and a talent—for making beautiful clothes. Daisy aims to become the finest dressmaker in London.

Dashing Irishman Patrick Flynn is wealthy and ambitious, and has entered society to find an aristocratic bride. Instead, he finds himself growing increasingly attracted to the headstrong, clever and outspoken Daisy. She’s wrong in every way—except the way she sets his heart racing.

However, when Flynn proposes marriage, Daisy refuses. She won't give up her hard-won independence. Besides, she doesn't want to join the fine ladies of society—she wants to dress them. She might, however, consider becoming Flynn's secret mistress...

But Flynn wants a wife, and when he sets his heart on something, nothing can stand in his way...

Praise For The Summer Bride (A Chance Sisters Romance #4)…

"[A] confection that brims with kindness and heartfelt sincerity...you can’t do much better than Anne Gracie who offers her share of daring escapes, stolen kisses, and heartfelt romance in a tale that carries the effervescent charm of the best Disney fairy-tales."
—Entertainment Weekly, on Marry in Scandal

“With her signature superbly nuanced characters, subtle sense of wit, and richly emotional writing, Gracie puts her distinctive stamp on a classic Regency plot.”
—Chicago Tribune, on The Accidental Wedding

Anne Gracie is the award-winning author of the Marriage of Convenience Romances and the Chance Sisters Romances. She spent her childhood and youth on the move. The gypsy life taught her that humor and love are universal languages and that favorite books can take you home, wherever you are. Anne started her first novel while backpacking solo around the world, writing by hand in notebooks. Since then, her books have been translated into more than sixteen languages, and include Japanese manga editions. As well as writing, Anne promotes adult literacy, flings balls for her dog, enjoys her tangled garden, and keeps bees.
Loading...
or support indie stores by buying on