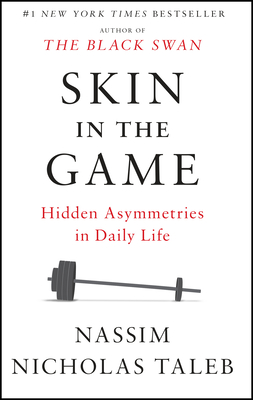 Skin in the Game

#1 NEW YORK TIMES BESTSELLER • A bold work from the author of The Black Swan that challenges many of our long-held beliefs about risk and reward, politics and religion, finance and personal responsibility

In his most provocative and practical book yet, one of the foremost thinkers of our time redefines what it means to understand the world, succeed in a profession, contribute to a fair and just society, detect nonsense, and influence others. Citing examples ranging from Hammurabi to Seneca, Antaeus the Giant to Donald Trump, Nassim Nicholas Taleb shows how the willingness to accept one’s own risks is an essential attribute of heroes, saints, and flourishing people in all walks of life.

As always both accessible and iconoclastic, Taleb challenges long-held beliefs about the values of those who spearhead military interventions, make financial investments, and propagate religious faiths. Among his insights:

• For social justice, focus on symmetry and risk sharing. You cannot make profits and transfer the risks to others, as bankers and large corporations do. You cannot get rich without owning your own risk and paying for your own losses. Forcing skin in the game corrects this asymmetry better than thousands of laws and regulations.
• Ethical rules aren’t universal. You’re part of a group larger than you, but it’s still smaller than humanity in general.
• Minorities, not majorities, run the world. The world is not run by consensus but by stubborn minorities imposing their tastes and ethics on others.
• You can be an intellectual yet still be an idiot. “Educated philistines” have been wrong on everything from Stalinism to Iraq to low-carb diets.
• Beware of complicated solutions (that someone was paid to find). A simple barbell can build muscle better than expensive new machines.
• True religion is commitment, not just faith. How much you believe in something is manifested only by what you’re willing to risk for it.

The phrase “skin in the game” is one we have often heard but rarely stopped to truly dissect. It is the backbone of risk management, but it’s also an astonishingly rich worldview that, as Taleb shows in this book, applies to all aspects of our lives. As Taleb says, “The symmetry of skin in the game is a simple rule that’s necessary for fairness and justice, and the ultimate BS-buster,” and “Never trust anyone who doesn’t have skin in the game. Without it, fools and crooks will benefit, and their mistakes will never come back to haunt them.”

Praise For Skin in the Game: Hidden Asymmetries in Daily Life (Incerto)…

“The most prophetic voice of all . . . [Taleb is] a genuinely significant philosopher . . . someone who is able to change the way we view the structure of the world through the strength, originality and veracity of his ideas alone.”—John Gray, GQ

“Taleb grabs on to core problems that others ignore, or don’t see, and shakes them like an attack dog on a leg.”—Greg from New York (Twitter)

“For my wife and me, Antifragile is an annual reread.”—Colle from Richmond, Virginia (Twitter)

“I read Antifragile four times. First, to get the wisdom to survive. Second, as a memorial statement for Fat Tony. Third, as Das Kapital with correct mathematics. Fourth, as ethics to learn a good way to die.”—Tamitake from Tokyo, Japan (Twitter)

“November . . . time for my annual reread of Antifragile.”—Johann from Vienna, Austria (Twitter)

“[Taleb writes] in a style that owes as much to Stephen Colbert as it does to Michel de Montaigne.”—The Wall Street Journal

Nassim Nicholas Taleb spent twenty-one years as a risk taker before becoming a researcher in philosophical, mathematical, and (mostly) practical problems with probability. Although he spends most of his time as a flâneur, meditating in cafés across the planet, he is currently Distinguished Professor at New York University’s Tandon School of Engineering. His books, part of a multivolume collection called Incerto, have been published in forty-one languages. Taleb has authored more than fifty scholarly papers as backup to Incerto, ranging from international affairs and risk management to statistical physics. Having been described as “a rare mix of courage and erudition,” he is widely recognized as the foremost thinker on probability and uncertainty. Taleb lives mostly in New York.
Loading...
or support indie stores by buying on