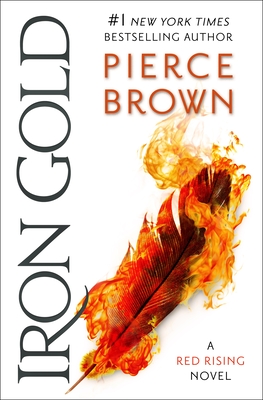 NEW YORK TIMES BESTSELLER • In the epic next chapter of the Red Rising Saga, the #1 bestselling author of Morning Star pushes the boundaries of one of the boldest series in fiction.

“Mature science fiction existing within the frame of blazing space opera . . .  done in a style [that] borders on Shakespearean.”—NPR (One of the Best Books of the Year)

They call him father, liberator, warlord, Slave King, Reaper. But he feels a boy as he falls toward the war-torn planet, his armor red, his army vast, his heart heavy. It is the tenth year of war and the thirty-third of his life.

A decade ago Darrow was the hero of the revolution he believed would break the chains of the Society. But the Rising has shattered everything: Instead of peace and freedom, it has brought endless war. Now he must risk all he has fought for on one last desperate mission. Darrow still believes he can save everyone, but can he save himself?

And throughout the worlds, other destinies entwine with Darrow’s to change his fate forever:

A young Red girl flees tragedy in her refugee camp, and achieves for herself a new life she could never have imagined.

An ex-soldier broken by grief is forced to steal the most valuable thing in the galaxy—or pay with his life.

And Lysander au Lune, the heir in exile to the Sovereign, wanders the stars with his mentor, Cassius, haunted by the loss of the world that Darrow transformed, and dreaming of what will rise from its ashes.

Red Rising was the story of the end of one universe. Iron Gold is the story of the creation of a new one. Witness the beginning of a stunning new saga of tragedy and triumph from masterly New York Times bestselling author Pierce Brown.

PRAISE FOR PIERCE BROWN AND THE RED RISING SAGA

“[A] spectacular adventure . . . one heart-pounding ride . . . Pierce Brown’s dizzyingly good debut novel evokes The Hunger Games, Lord of the Flies, and Ender’s Game. . . . [Red Rising] has everything it needs to become meteoric.”—Entertainment Weekly

“Brown writes layered, flawed characters . . . but plot is his most breathtaking strength. . . . Every action seems to flow into the next.”—NPR

“A page-turning epic filled with twists and turns . . . The conclusion to [Pierce] Brown’s saga is simply stellar.”—Booklist (starred review)

Pierce Brown is the #1 New York Times bestselling author of Red Rising, Golden Son, Morning Star, Iron Gold, and Dark Age. His work has been published in thirty-three languages and thirty-five territories. He lives in Los Angeles, where he is at work on his next novel.
Loading...
or support indie stores by buying on