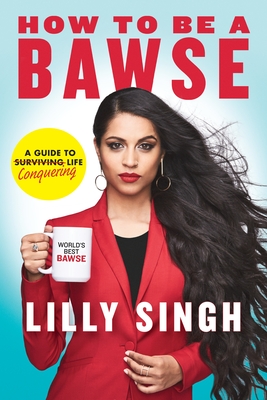 How to Be a Bawse (Hardcover)

A Guide to Conquering Life

#1 NEW YORK TIMES BESTSELLER • From the People’s Choice Award winner for Favorite YouTube Star and host of NBC’s upcoming A Little Late with Lilly Singh comes the definitive guide to being a bawse: a person who exudes confidence, hustles relentlessly, and smiles genuinely because he or she has fought through it all and made it out the other side.

Lilly Singh isn’t just a superstar. She’s Superwoman—which is also the name of her wildly popular YouTube channel. Funny, smart, and insightful, the actress and comedian covers topics ranging from relationships to career choices to everyday annoyances. It’s no wonder she’s garnered more than a billion views. But Lilly didn’t get to the top by being lucky—she had to work for it. Hard.

Now Lilly wants to share the lessons she learned while taking the world by storm, and the tools she used to do it. How to Be a Bawse is the definitive guide to conquering life. Make no mistake, there are no shortcuts to success, personal or professional. World domination requires real effort, dedication, and determination. Just consider Lilly a personal trainer for your life—with fifty rules to get you in the game, including

• Let Go of FOMO (Fear of Missing Out): Temptation will try to steer you away from your goals. FOMO is just a test of your priorities, a test that a bawse is ready to pass.
• Be Nice to People: Treat niceness like an item on your daily to-do list. People will go out of their way to help and support you because you make them feel good.
• Schedule Inspiration: Lack of motivation isn’t permanent or a sign of weakness. Expect it and proactively schedule time to be creative.
• Be the Dumbest: Challenge yourself by surrounding yourself with people who know more than you do. It’s a vital way to learn and improve.

Told in Lilly’s hilarious, bold voice and packed with photos and candid stories from her journey to the top, How to Be a Bawse will make you love your life and yourself—even more than you love Beyoncé. (Yes, we said it!)

WARNING: This book does not include hopeful thoughts, lucky charms, or cute quotes. That’s because success, happiness, and everything else you want in life need to be worked for, not wished for. In Lilly’s world, there are no escalators, only stairs. Get ready to climb.

“Lilly is a bona fide #girlboss, boss, and bawse. Her meteoric rise has come with so many incredible lessons that we are all lucky to have access to. This book is a must-have for the hustler in all of us.”—Sophia Amoruso, founder and CEO, Girlboss

Lilly Singh is a multifaceted entertainer, finding success as an actress, producer, writer, and creator. One of the most recognizable digital creators, she has amassed a global audience more than fourteen million YouTube subscribers with more than two billion video views on her ||Superwoman|| channel. She appeared in Ramin Bahrani’s Emmy-nominated HBO film Fahrenheit 451 opposite Michael Shannon and Michael B. Jordan, and also had roles in the feature films Ice Age: Collision Course and Bad Moms. In 2016, Singh starred in and produced her own YouTube Red feature-length film, A Trip to Unicorn Island.

Singh is the author of the New York Times bestseller How to Be a Bawse: A Guide to Conquering Life. A successful entrepreneur, Singh released her own signature lipstick, called Bawse, with Smashbox and has collaborated with Calvin Klein, Pantene, and Olay. Singh was named to Forbes’s 30 Under 30: Hollywood & Entertainment and Fast Company’s Most Creative People in Business lists and Time named her one of the most influential people on the Internet.

As a prominent voice and activist for women’s rights and girls’ access to education, Singh created her #GirlLove initiative to inspire positivity among women in order to better support each other’s voices and encourage upward mobility. She is also a UNICEF Goodwill Ambassador.

Praise For How to Be a Bawse: A Guide to Conquering Life…

“Singh segues from her inspirational and uber-watched YouTube videos to essays on how to become a bawse, that is, a supremely self-confident person. She’s been named one of Time’s 2016 ‘30 Most Influential People on the Internet,’ Variety’s ‘10 Comics To Watch for 2016,’ Forbes’s ‘30 Under 30,’ Vogue’s ‘8 YouTube Stars That Are Taking Over the World,’ and more.”—Library Journal

“Lilly is a bona fide #girlboss, boss, and bawse. Her meteoric rise has come with so many incredible lessons that we are all lucky to have access to. This book is a must-have for the hustler in all of us.”—Sophia Amoruso, founder and CEO, Girlboss
or support indie stores by buying on
(This book is on backorder)
Copyright © 2020 American Booksellers Association