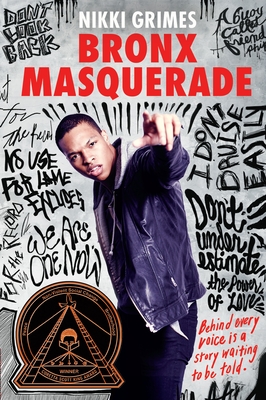 The beloved and award-winning novel now available in a new format with a great new cover!

When Wesley Boone writes a poem for his high school English class, some of his classmates clamor to read their poems aloud too. Soon they're having weekly poetry sessions and, one by one, the eighteen students are opening up and taking on the risky challenge of self-revelation. There's Lupe Alvarin, desperate to have a baby so she will feel loved. Raynard Patterson, hiding a secret behind his silence. Porscha Johnson, needing an outlet for her anger after her mother OD's. Through the poetry they share and narratives in which they reveal their most intimate thoughts about themselves and one another, their words and lives show what lies beneath the skin, behind the eyes, beyond the masquerade.

"A flowing, rhythmic portrait of the diversity and individuality of teen characters in a classroom in Anywhere, U.S.A. . . . As their stories unfold and intertwine with those of their classmates, readers are able to observe changes in them and watch the group evolve into a more cohesive unit. . . . Competent and reluctant readers alike will recognize and empathize with these teens. As always, Grimes gives young people exactly what they're looking for--real characters who show them they are not alone."--SLJ

"Funny and painful, awkward and abstract, the poems talk about race, abuse, parental love, neglect, death, and body image. Most of all, they try to reveal the individuals beyond the stereotypes. . . . Readers will enjoy the lively, smart voices that talk bravely about real issues and secret fears. A fantastic choice."--Booklist

"All of the [students], black, Latino, white, male, and female, talk about the unease and alienation endemic to their ages, and they do it in fresh and appealing voices.  Rich and complex."--Kirkus

"Grimes's creative, contemporary premise will hook teens, and the poems may even inspire readers to try a few of their own."--Publishers Weekly