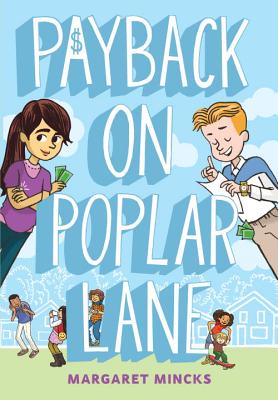 Ways to Run (Ruin) a Successful Business:
1. Hire your neighbor as an (unpaid) intern.
2. Make them do all the work.
3. Take all the credit.
4. Bask in the glow of your achievements.
5. Completely underestimate your neighbor.
6. Do not expect payback.

ABC's Shark Tank meets The Terrible Two when a pair of sixth grade entrepreneurs compete to become top mogul on their block. Payback on Poplar Lane is a pitch-perfect comedy, destined to become a middle-grade classic.

PRAISE FOR PAYBACK ON POPLAR LANE:

“Payback on Poplar Lane should be rated 5 stars by The Funny Business Bureau. This is the funniest book I’ve read in years.”
—Chris Grabenstein, #1 New York Times bestselling author of the Mr. Lemoncello series.

“A comical yet compassionate story of two determined, quirky characters who misstep big time on the ladder to success.”
—Lee Wardlaw, author of bestselling book, 101 Ways to Bug Your Parents

"Charming and brilliant."
—The Reading Nook

"Readers who enjoy realistic fiction and friendship stories will snatch this title off the shelf."
—School Library Connection

Margaret Mincks grew up the second oldest of eight kids. When she wasn't swimming, acting, making up slightly disturbing songs, or filming B-movie parodies with siblings and friends, she was writing and illustrating stories. After graduating from the University of Virginia, she moved to Chicago to perform improvisational comedy with the iO Theater. She later worked at Spider, a literary magazine for six- to nine-year-olds, as an editor. Margaret has also written for children's nonfiction series like Ripley's Believe It or Not. She now lives in Florida with her husband, young daughter, and her Staffordshire bull terrier named Reesie.
Loading...
or
Not Currently Available for Direct Purchase