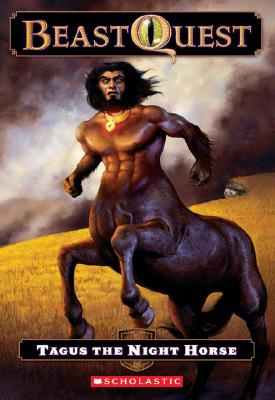 One boy's journey to help his village becomes a quest to save the kingdom. Features a fearsome new beast in every book
A mysterious force has been creeping over the plains of Avantia. The animals are stampeding, and brush fires sweep the prairie. The farmers are spooked--whispers of a mysterious horseman are spreading as fast as the stampedes. And now that someone has disappeared on a cattle drive, suspicion runs high.
Tom and Elenna speed to the plains to stop Tagus the Night Mare before he can do any more damage. But Tom ends up in the wrong place at the wrong time and is mistakenly thrown in jail. Can he win the trust of the people--and his own freedom--before it's too late to stop Tagus?

Adam Blade is in his late twenties, and was born in Kent, England. His parents were both history teachers and amateur artists, and Adam grew up surrounded by his father's paintings of historic English battles which left a lifelong mark on his imagination. He was also fascinated by the ancient sword and shield that hung in his father's office. Adam's father said they were a Blade family heirloom. Sadly, Adam does not have his own Ice Dragon or Ghost Panther. But he really wishes he did!
Loading...
or
Not Currently Available for Direct Purchase