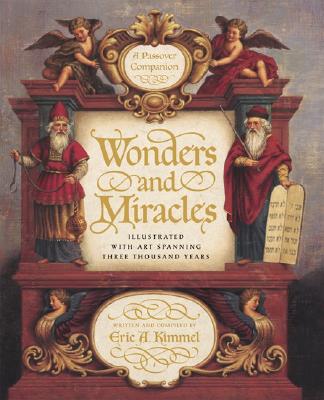 In this rich and fascinating compilation, beloved storyteller Eric A. Kimmel presents every element--from beginning to end -- of this ancient holiday through stories, songs, poems, prayers and art. Reflecting three millenniums of Jewish life around the world, the book will not only make this multi-layered holiday accessible to people of every background. But it will also make this timeless-ever changing holiday relevant to today's readers.
(continued on next page.....)

Kirkus Reviews: JANUARY 15, 2004
A star is assigned to books of unusual merit, determined by the editors of Kirkus Reviews.
Kimmel compiles a beautiful celebration of Passover, one of the most observed holidays on the Jewish calendar, with contributions by some well-known authors such as Nina Jaffe and Rachel Pomerantz. He weaves highlights of history, ritual, and customs of the annual spring feast throughout a simplified Haggadah (the Seder Book), using stories, song, poetry, prayers, and some exquisite facsimile artwork. Taking readers through the traditional 14 portions of the Seder (festival service and meal), he outlines the legendary biblical exodus with the ceremonial prayers and readings, and includes a historical perspective on how the timeless service has evolved and changed over the last 3,000 years from both the Ashkenazic (Eastern European) and Sephardic (Spanish and Middle Eastern) cultures. Handsomely designed with colorful reproductions embellished with red and gold-leaf chapter headings and borders, this informative and interesting volume is one to own and bring to the Seder table for generations to come. Detailed index, bibliography, and artwork credits appended. A truly wonderful and outstanding achievement. (Nonfiction. All ages)

Gr. 4-8. There are many Passover books, but this one is exceptionally handsome and will be especially useful. Unlike many volumes that simply focus on the service, this uses the seder as a hub, with spokes of poetry, story, and song extending from it. Not only hasimmel compiled these works, which include everything from a tale about theewish Tom Thumb and stories based onewish commentaries to delicious-sounding recipes, he has also added some of his own work and, of course, has written the main body of the text. His writing shines as he ably explains the holiday, its customs, and rituals in language simple enough for children yet layered to keep the attention of teens and adults. Matching his words is well chosen, beautifully reproduced artwork, mostly historical, with much of it seeming timeless in the oversize, gilt-garnished format. It's an inviting volume that can be used before the seder as well as during it, in conjunction with the Haggadah. In time the snowy pages may become finger marked from use, but that will only make this volume lovelier. --Ilene Cooper Copyright 2004 Booklist

Handsomely produced in an 8" x 11" format with a sewn-in ribbon bookmark, this lavishly illustrated compendium gathers together information about the components of the Passover seder-the rituals, prayers, songs and the words of the Haggadah (the Passover prayer book)-and weaves in stories, poems and the like from a variety of authors. Chiefly addressing people who celebrate Passover, Kimmel (When Mindy Saved Hanukkah; Gershon's Monster) evenly incorporates the many voices by interspersing his own colorful exposition throughout. Whether he discusses a basic point (e.g., the foods that go on a seder plate) or something more philosophical (why do people remove drops of wine from their cups during the naming of the plagues visited on Egypt?), readers' attentions will be held, both by the text and by the art. The illustrations range from a 15th-century B.C.E. Egyptian mural of slaves making bricks and mortar to numerous Haggadoth dating from 13th-century France, 14th-century Spain, 17th-century Amsterdam, etc.; they also include such artifacts as a 19th-century matzoh cover from India and a contemporary clay sculpture of Miriam dancing. This beautifully designed book could take pride of place at many a Passover table. All ages. (Feb.) Copyright 2004 Reed Business Information.