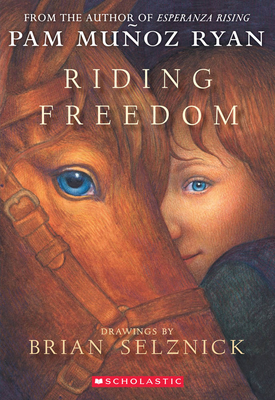 In this fast-paced, courageous, and inspiring story, readers adventure with Charlotte Parkhurst as she first finds work as a stable hand, becomes a famous stage-coach driver (performing brave feats and outwitting bandits), finds love as a woman but later resumes her identity as a man after the loss of a baby and the tragic death of her husband, and ultimately settles out west on the farm she'd dreamed of having since childhood. It wasn't until after her death that anyone discovered she was a woman.

"With a pacing that moves along at a gallop, this is a skillful execution of a fascinating historical tale." –Publishers Weekly, starred review

"Youngsters who liked Caddie Woodlawn better unreformed and who appreciate an atmospheric blend of grit, gorses, and history will want to take a ride with Charley." –Bulletin of the Center for Children's Books

Pam Munoz Ryan is the recipient of the NEA's Human and Civil Rights Award and the Virginia Hamilton Literary Award for multicultural literature. She has written more than thirty books which have garnered, among countless accolades, the Pura Belpre Medal, the Jane Addams Award, and the Schneider Family Award. Pam lives near San Diego. You can visit her at www.pammunozryan.com.

In addition to The Invention of Hugo Cabret, Brian Selznick is the illustrator of the Caldecott Honor winner, The Dinosaurs of Waterhouse Hawkins, and The New York Times Best Illustrated Walt Whitman: Words for America, both by Barbara Kerley, as well as the Sibert Honor Winner When Marian Sang, by Pam Muñoz Ryan, and numerous other celebrated picture books and novels. Brian has also worked as a set designer and a puppeteer. When he isn’t traveling to promote his work all over the world, he lives in San Diego, California, and Brooklyn, New York.
Loading...
or support indie stores by buying on