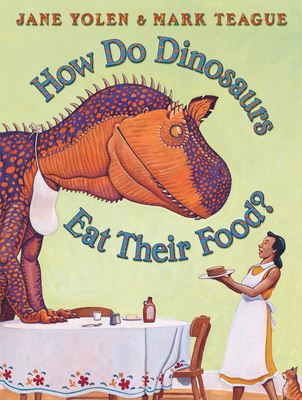 How Do Dinosaurs Eat Their Food?

The bestselling, award-winning team of Yolen and Teague are back with another playful dinosaur tale--a third full-length picture book about how dinosaurs behave at mealtime.How does a dinosaur eat all his food?Does he burp, does he belch, or make noises quite rude?Does he pick at his cereal, throw down his cup,hoping to make someone else pick it up? Just like kids, dinosaurs have a difficult time learning to behave at the table. However, with a little help from Mom and Dad, these young dinosaurs eat all before them with smiles and goodwill. As in their previous books, Yolen and Teague capture children's rambunctious natures with playful read-aloud verse and wonderfully amusing pictures.

Praise For How Do Dinosaurs Eat Their Food?…

PW 7/25
Echoing the tone and look of How Do Dinosaurs Say Goodnight? and How Do Dinosaurs Get Well Soon?, these collaborators' latest guide to dino etiquette offers a jaunty comedy of errors, er, table manners. In the first half, against spare backdrops with a 1950s feel, dinosaurs behave kid-pleasingly naughtily when their human parents serve them meals. As Yolen's rhyming narrative asks questions ("How does a dinosaur eat all his food? Does he burp, does he belch, or make noises quite rude?"), Teague's illustrations provide affirmative answers, comically capturing the dining dinos' antics: one is covered in spaghetti after throwing his plate into the air, another blows bubbles in his milk glass and a third lies on the floor, happily sticking beans up his nose. The tables turn in the second half, when narrative and pictures offer Miss Manners alternatives while revisiting the same prehistoric heroes. One willingly says "Please" and "Thank you" (while wearing a bib) and another "tries every new thing, at least one small bite. He makes no loud noises--that isn't polite." Young dinosaur fans wi

Mark Teague is the internationally bestselling illustrator (and author) of more than 50 books for children. His numerous awards and honors include the Book Sense Book of the Year Award and the Christopher Medal. He has illustrated 12 full-size books and 11 board books in the widely successful How Do Dinosaurs...? series. He is the author of the popular Dear Mrs. LaRue, Firehouse!, and Jack and the Beanstalk and the French Fries. He lives in New York State.
Jane Yolen is the beloved author of more than 365 books for children and adults, including award-winning picture books, fiction, nonfiction, and poetry. In addition to two Nebula Awards and a National Book Award nomination, she has received a Golden Kite from SCBWI, three Mythopoeic Fantasy Awards, and the California Young Reader Medal. Yolen's How Do Dinosaurs Say Good Night? was an ALA Notable Book and a Christopher Medal winner. The book has gone on to become a widely popular bestselling series with over 15 million copies in print. She lives in Western Massachusetts.
Loading...
or support indie stores by buying on