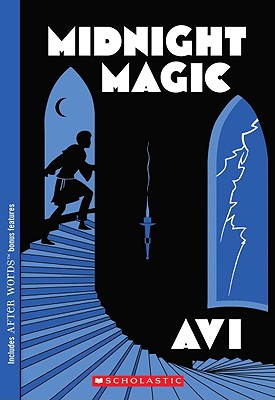 Reintroducing a magical, bestselling medieval mystery from a Newbery-winning author! The release coincides with Avi's exciting new companion to this book, MURDER AT MIDNIGHT.


Night after night, a ghost appears in the royal castle of Pergamontio, terrifying the princess. Mangus the Magician doesn't believe in ghosts, but that doesn't stop him from being charged with finding this one. The King demands that Mangus free his daughter from the torment of the ghost. . . otherwise, the magician will pay with his life. Mangus's only hope is his faithful, street-smart servant boy, Fabrizio, who must solve the mystery of the ghost using logic and reason -- and a bit of magic of his own.

“With snappy dialogue, nonstop action, and lavishly embroidered period backdrops, this will please Avi's fans and may well win over some new ones.” –Publishers Weekly, starred review

“A medieval mystery that will keep readers guessing to the very end.” –Booklist

“The pages fly with intrigue and action.” –Horn Book

Avi's work spans nearly every genre and has received nearly every major prize, including the Newbery Medal for CRISPIN: THE CROSS OF LEAD and Newbery Honors for NOTHING BUT THE TRUTH and THE TRUE CONFESSIONS OF CHARLOTTE DOYLE. Avi lives in Denver, Colorado. You can visit him online at www.avi-writer.com.
or support indie stores by buying on