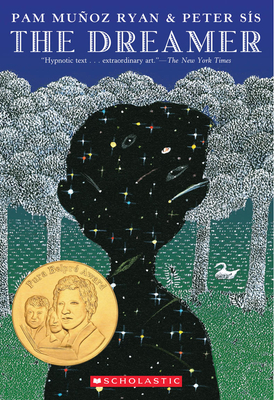 *“ This book has all the feel of a classic, elegant and measured, but deeply rewarding and eminently readable.” --Booklist, starred review

“Ryan's hypnotic text, inspired by the childhood of Pablo Neruda, is brought to life by the extraordinary art of Peter Sis.”–New York Times Book Review

“A phantasmagorical rumination on the childhood of the great Chilean poet Pablo Neruda is rooted in a belief that words possess the power to mend the spirit and change the world.”--Smithsonian Notable List

Pam Muñoz Ryan is the recipient of the Newbery Honor Medal and the Kirkus Prize for her New York Times bestselling novel, Echo, as well as the NEA’s Human and Civil Rights Award and the Virginia Hamilton Literary Award for multicultural literature for her body of work. She has written more than thirty books for young readers. Her celebrated novels, Echo, Esperanza Rising, The Dreamer, Riding Freedom, Becoming Naomi Léon, and Paint the Wind, have received countless accolades, among them two Pura Belpré Awards, a NAPPA Gold Award, a Jane Addams Children’s Book Award, and two Americas Awards. Her acclaimed picture books include Amelia and Eleanor Go for a Ride and When Marian Sang, both illustrated by Brian Selznick, and Tony Baloney, illustrated by Edwin Fotheringham, as well as a beginning reader series featuring Tony Baloney. Ryan lives near San Diego, CA with her family.

Peter Sís is a Hans Christian Anderson Award winner, a three-time Caldecott Honoree, a Sibert Award winner, and a MacArthur Fellow. He is the illustrator of Pam Muñoz Ryan's The Dreamer, a Pura Belpré Award winner, a Boston Globe-Horn Book Honor Book, and an ALA Notable. Sís's many celebrated picture books, including Starry Messenger: Galileo Galilei, Tibet Through the Red Box, and The Wall: Growing Up Behind the Iron Curtain, are treasured by readers all over the world. His most recent picture book, Ice Cream Summer, was hailed by Kirkus Reviews in a starred review as “an encomium to summer, to the power of learning, and to that beloved, creamy-cold treat.” When Peter isn’t traveling the globe eating ice cream, he creates picture books and fine art that can be seen in galleries, museums, and public spaces from New York to Los Angeles, London to Prague, and lots of cities in between. Visit Peter online and learn more about his award-winning books at www.petersis.com.
or support indie stores by buying on