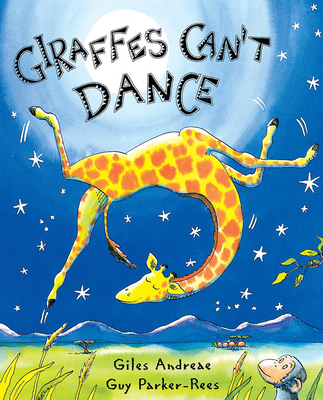 Giles Andreae is the award-winning author of numerous children's books, including K IS FOR KISSING A COOL KANGAROO and THE CHIMPANZEES OF HAPPYTOWN. Giles lives in London with his wife and three children.

Guy Parker-Rees has illustrated many bestselling Orchard books, including K IS FOR KISSING A COOL KANGAROO and THE CHIMPANZEES OF HAPPYTOWN by Giles Andreae; DOWN BY THE COOL OF THE POOL, DINOSAURUMPUS!, and ALL AFLOAT ON NOAH'S BOAT by Tony Mitton; QUIET! by Paul Bright; and THE HIPPO-NOT-AMUS by Tony and Jan Payne. He lives in Brighton, England.

Andreae's ode to a different drummer stumbles when it preaches about uncovering your own beat, but is ferned along by enough sweet verse and Parker-Rees' dazzling colors that it almost pulls its own weight. Gerald the giraffe's legs are too spindly for dancing, they are always buckling at the knees when it comes to the old soft-shoe. And while all the other creatures show some mean moves at the Jungle Dance ("The chimps all did a cha-cha/with a very Latin feel,/and eight baboons then teamed up/for a special Scottish reel"), poor Gerald is hooted off the dance floor before he even has a chance to crumple. As he shuffles homeward, and as he stopes to admire the moon, a cricket suggest that "just need a different song." So, to the sound of the wind in the trees, Gerald starts to move: a gentle swaying, some circling, ans some swishing. Suddenly he commences to belt out Olympic-quality gymnastic moves--"Then he did a backward somersault/and leapt up in the air"---that blows the other animals away. But probably not readers, even the youngest of whom will want to know just why Gerald's legs didn't buckle this time, special music or not. Bad enough that in a story about rhythm, the verse doesn't always scan--but mus Gerald srike the Travolta pose? Gerald doesn't find himself, he simply learns how to mimic.
---Kirkus Reviews, July 1st 2001

All the jungle's got the beat, but Gerald the giraffe has four left feet. Such is the dilemma in this British team's bouncy if didactic picture book about self-esteem. As a multitude of fleet-footed beasts eagerly "skip and prance" at the annual Jungle Dance in Africa, Gerald feels sad "because when it comes to dancing/ he was really very bad." Jeered by waltzing warthogs and cha-cha-ing chimps when he attempts to cut a rug, Gerald hangs his head and leaves the celebration behind. Luckily, a friendly cricket appears in the moonlight, chirping a morale-boosting song of self-confidence that soon sets Gerald in graceful motion. Andreae's rhyming text has a jaunty rhythm that's likely to spark interest in the read-aloud crowd, in spite of a heavy-handed message. Parker-Rees's kicky depictions of slighly anthropomorphic animals boogying on the dance floor are the highlight here. His watercolor and pen-and-ink artwork exudes a fun, party vibe.
--Publishers Weekly, September 10th, 2001

A clumsy giraffe is instantly transformed into an exceptional dancer when he finds music that he loves. Gerald has tall, thin legs, which are good for standing still, but when lie tries to run, his crooked knees buckle. At the annual Jungle Dance, lie is laughed off the floor. A cricket tells him that "...sometimes when you're different you just need a different song." This advice enables the lonely creature to dance, much to the amazement of the other animals. The rhythmic text follows a pattern of four lilies per stanza. Some rhyme and others do not. Some flow smoothly; others are forced. One line states that, "He threw his arms out sideways. - - ." Huh! Giraffes don't have arms. Full-page color illustrations done in pen and ink and watercolor are bold and warm. Characters are whimsical and expressive, but they don't make up for the drastic and unbelievable turnaround that takes place upon hearing the cricket play his violin. For stories about individuality, stick with Helen Lester's Tacky the Penguin (1988) and Three Cheers for Tacky (1994, both Houghton) or Robert Kraus's Leo the Late Bloomer (HarperCollins 1971) and Owliver (Prentice-Hall, 1974; o.p.).
---School Library Journal, October 2001
or
Buy Here
Copyright © 2020 American Booksellers Association