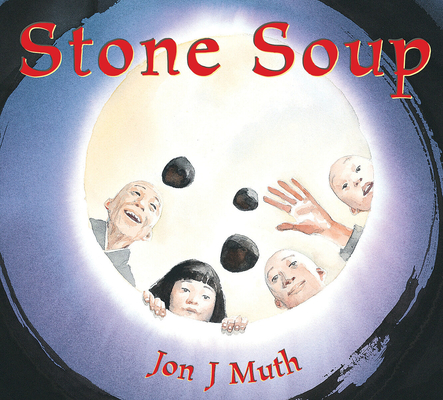 Three strangers, hungry and tired, pass through a war-torn village. Embittered and suspicious from the war, the people hide their food and close their windows tight. That is, until the clever strangers suggest making a soup from stones. Intrigued by the idea, everyone brings what they have until-- together, they have made a feast fit for a king!
In this inspiring story about the strength people possess when they work together, Muth takes a simple, beloved tale and adds his own fresh twist.

"Delicious and satisfying." -- The Horn Book
* "With the same aesthetic grace he displayed with Tolstoy's The Three Questions, Muth here transports a classic tale to rural China. The setting not only allows his evocative, impressionistic watercolors to play over mist and mountains but also affords an opportunity for Buddhist underpinnings. ... And while the tale of "Stone Soup" can be told to make fools of the villagers, here it becomes an offering as generous as Muth's villagers turn out to be. -- Publishers Weekly, starred review