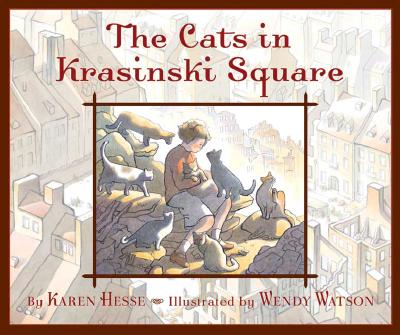 The Cats In Krasinkski Square

Newbery medalist Karen Hesse tells a harrowing, true story about life in the Warsaw Ghetto during WWII.
When Karen Hesse came upon a short article about cats out-foxing the Gestapo at the train station in Warsaw during WWII, she couldn't get the story out of her mind. The result is this stirring account of a Jewish girl's involvement in the Resistance. At once terrifying and soulful, this fictional account, borne of meticulous research, is a testament to history and to our passionate will to survive, as only Newbery Medalist Karen Hesse can write it.

Praise For The Cats In Krasinkski Square…

Kirkus
Review Date: AUGUST 01, 2004
STARRED
A young Jewish girl and her sister, "passing" as Polish in WWII Warsaw, plot to sneak food, brought by collaborating train passengers, into the ghetto. Their scheme is jeopardized when the Gestapo meets the train with dogs that sniff out both smugglers and contraband food. To foil the Nazis, the sisters gather up the feral cats of Krasinski Square in baskets. They release the cats as a distraction to the dogs, thus allowing the food to be smuggled into the ghetto. Skilled pacing renders the cat solution a satisfyingly subversive surprise while Watson's illustration of the flummoxed Nazis underscores the ensuing chaos. The illustrations, with their soft but firm line and monochromatic sepia-toned palette, have an appropriate retro look. Among the great historical avalanche of Holocaust stories, Hesse has found a little-known vignette that she treats with her customary modest but elevating free-verse style, making a grave subject enormously accessible, gently humorous, and affectingly triumphant. (author's note, historical note) (Picture book. 6-10)

School Library Journal
November 1, 2004
Gr 3-5-Set in Warsaw in 1942, this picture book brings to life a little-known incident of Jewish resistance. A young girl who has escaped the Ghetto lives with her older sister who, with friends, plans to smuggle food to those still there. Somehow the Gestapo has heard of the plan and has designs of its own-dogs to sniff out the bundles of food arriving with the resisters on a train. With quick thinking, the friends gather all of the cats living in Krasinski Square into baskets and head for the station. Just as the train pulls in, the felines are let loose, the dogs chase the cats, chaos erupts, and eventually the contraband is passed through the chinks in the Ghetto wall. Illustrated by Watson in an arresting departure from her usual style in muted tans, browns, and oranges, the cats, the people, the buildings of Warsaw, and even the snarling dogs are bathed in a warm yellow light-a kind of innocent luminescence of hope that belies the evil that is being done. The play of light and the naturalness of the cats' poses are almost a comfort in a story that adults sense as keenly distressing, and that beckons for adult interpretation or guidance. What is clear is the immediate poignancy of these cats and the author's evocative language in describing them: "They belonged once to someone. They slept on sofa cushions- they purred- nuzzling the chins of their beloveds." They could be the Polish Jewry of the Warsaw Ghetto.-Harriett Fargnoli, Great Neck Library, NY Copyright 2004 Reed Business Information.

Booklist
STARRED October 15, 2004
Gr. 2-5. In luminous free verse, Hesse's latest picture book tells a powerful story of a young Jewish girl who, together with her older sister, ingeniously fights the Nazi occupation of Warsaw. After escaping from the Jewish ghetto, the girl avoids detection: I wear my Polish look, / I walk my Polish walk. / Polish words float from my lips / and I am almost safe, / almost invisible. She finds joy in playing with the city's abandoned cats, who show her holes in the ghetto wall, which the girl's older sister and their resistance friends will use to pass supplies shipped by train to Warsaw. The Gestapo learns of the scheme, and soldiers wait at the train station with dogs. Luckily, the cats inspire a solution; they distract the dogs and protect the supplies. It's an empowering story about the bravery and impact of young people, and Hesse's clear, spare poetry, from the girl's viewpoint, refers to the hardships suffered without didacticism. In bold, black lines and washes of smoky gray and ochre, Watson's arresting images echo the pared-down language as well as the hope that shines like the glints of sunlight on Krasinski Square. An author's note references the true events and heartbreaking history that inspired this stirring, expertly crafted story. --Gillian Engberg Copyright 2004 Booklist

(Intermediate) A little girl (perhaps ten years old or so) narrates this story of wartime Poland, describing her visits with the abandoned cats in Krasinski Square and how they came to be helpers in a scheme to smuggle food into the Warsaw Ghetto. The girl has escaped from the Ghetto and now protects herself by looking like "any child": "I wear my Polish look, / I walk my Polish walk. / Polish words float from my lips / and I am almost safe, / almost invisible." The girl and her older sister work with the Jewish resistance to get food into the Ghetto, but when word comes that their plan is known by the Gestapo, the cats provide a useful distraction. Both author and artist achieve a fine balance of beauty and sadness. Simple, graceful words and pictures make this adventure story a taut and moving one. Watson's illustrations -- watercolor, ink, and pencil -- reveal the girl's sensitivity and delicacy, while the artist's depiction of the cats seems to pay homage to Wanda Gag's Millions of Cats. Watson shows the wartime city -- with the soldiers and their dogs patrolling streets lined with elegant buildings -- using warm shades of browns and golds to convey a soft glow of hope alongside tragedy. Some may object to the imaginary story of quiet triumph set against real-life tragic events, but Hesse's author's note explains where her idea came from, and how, just as in this tale, Jews passing as non-Jewish Poles played a critical role in saving others. Copyright 2004 of The Horn Book, Inc. All rights reserved.

Publishers Weekly
August 23, 2004
STARRED
In her spare yet lyrical narrative, Newbery medalist Hesse (Out of the Dust) relays a haunting story based on an actual incident involving Poland's Warsaw Ghetto. Watson, best known for Father Fox's Pennyrhymes, makes a stunning stylistic departure here, with artwork in muted tones of brown, gold and brick red. An aerial view of Krasinski Square on the title spread depicts buildings with gaping holes that define a plaza overrun with tanks and soldiers. Into this atmosphere, author and illustrator introduce the young narrator, who approaches a line of stray cats emerging from a pile of rubble. "I look like any child/ playing with cats/ in the daylight/ in Warsaw,/ my Jewish armband/ burned with the rags I wore/ when I escaped the Ghetto." The girl comforts the many homeless cats who "belonged once to someone /[and] slept on sofa cushions/ and ate from crystal dishes," whispering to them that she has "no food to spare." Yet she has more to eat than her friend Michal, who lives on the other side of the Wall. The child's older sister, Mira ("all that is left of our family"), describes the "newest plan" to smuggle food into the Ghetto: friends will come by train, hiding food in their satchels, which the sisters and others will sneak through the cracks in the Wall. When word comes that the Gestapo has caught wind of the plan and will meet the train with dogs to sniff out the smugglers, the narrator comes up with a plan of her own to foil the Nazis. Watson achieves an impressive versatility with her pencil, ink and watercolor artwork; her fine ink line emphasizes the starkness of the Ghetto's confines while her warmly toned watercolor wash conveys the coziness of Mira's home, spare though it may be. Other touchesÄthe almost comical chaos that erupts at the train station in a flurry of cats and dogs, and the town carousel, a universal mark of childhoodÄallow readers to experience the terrifying events from somewhat of a cushioned distance. Author and artist take a complex situation and make its most important aspects comprehensible to a child. Older readers will most appreciate the bravery and intelligence of this impressive heroine. Ages 7-10. (Sept.) Copyright 2004 Reed Business Information.

""...Hesse has found a little-known vignette that she treats with her customary modest but elevating free-verse style..." -Kirkus Reviews STARRED

""Author and artist take a complex situation and make its most important aspects comprehensible to a child..."" -PW STARRED

""Simple, graceful words and pictures make this adventure story a taut and moving one."" -Horn Book

Karen Hesse is the award-winning and critically acclaimed author of many books for children. Her titles include Witness, The Cats in Krasinski Square, and the Newbery Medal winner Out of the Dust, among many others. She lives in Vermont with her husband and two teenaged daughters.

Wendy Watson is the author and illustrator of Hurray for the Fourth of July. She was raised with seven brothers and sisters on a farm in Vermont, where she received her early education and art training from her mother and father. She studied painting in Truro, Massachusetts and at the National Academy of Design in New York City. She is the author-illustrator of more than a dozen children's books, including Thanksgiving at Our House, A Valentine for You, and the Clarion edition of Clement C. Moore's The Night Before Christmas. She lives with her family in Vermont.
Loading...
or
Not Currently Available for Direct Purchase