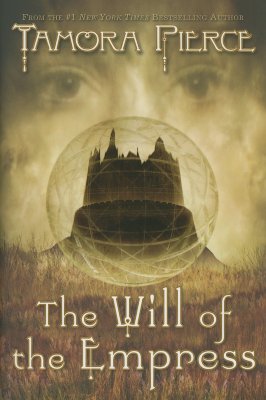 The Will of the Empress

Sandry, Daja, Briar, and Tris, are older now and back together again, in an exciting and much-awaited, stand-alone novel by everyone's favorite mage, Tamora Pierce.
For many years, Sandry's cousin, the Empress of Namorn, has pressed her to visit. But Sandry prefers to stay with her own family in Emelan. Now, as is her right, the Empress has insisted. Sandry will not travel with a group of warriors -- that would only insult the Empress. She will travel with her friends from Winding Circle: Daja, Briar, and Tris. But the four young mages haven't been together in some time, and their friendship isn't what it used to be. Since they left Winding Circle, each has seen magic manipulated in ways -- both good and bad -- that they could not have imagined (cont'd)

Praise For The Will of the Empress…

VOYA 10/1/05
Young mages and foster siblings Sandry, Briar, Daja, and Tris suffer a bumpy reunion after traveling independently of one another for a year. When Sandry's noble uncle requests that the others accompany her on a journey to visit her properties in neighboring Namorm, they rediscover their affinities and learn how their unique powers complement one another. Sandry's empress cousin wishes to keep Sandry and her inheritance in the country and plots at every opportunity to marry her to a Namornese nobleman, leading to some action-packed showdowns between the characters with magical abilities.
This lengthy novel is full of journeys, adventure, and court life, but its strength lies in its complex characters and solid incorporation of social issues into the tale: Namorn has a long-standing tradition of kidnapping and forced marriage for its girls, which the mages work against politically. Sandry reflects in the qualities of a good leader and returns to issues of class and social justice time and time again, and one of the mages comes out as a lesbian. Fans of the four mages will enjoy this continuation of their story, but the book stands on its own. Readers will find this feminist tale thought provoking, and it might provide enough material for a good classroom discussion.

HB Nov/Dec 05
Tamora Pierce The Will of the Empress
539 pp. Scholastic 11/05 isbn 0-439-44171-4 $17.99 g
(Middle School)
Now sixteen and beginning to think of their futures, the four mages of Pierce's Circle Quartet are reunited after their separate travels (recounted in the Circle Opens series). Briar, Tris, and Daja escort Sandry on a visit to her estates in Namorn, but the powerful empress of Namorn has plans to make all four of them remain there under her control -- and she's not used to taking no for an answer. As the court intrigue unfolds (the empress sics several suitors on Sandry in order to keep her in Namorn; Daja surprises herself by falling in love with the empress's wardrobe mistress), the familiar characters demonstrate why they're so popular with tween readers: gruff exteriors invariably hide tender hearts; strays are always collected and cared for; friendship and loyalty triumph over riches and position (but riches and position come along anyway). Although the foursome's eventual escape is never in doubt, Pierce has some fresh surprises regarding each mage's powers, and through danger and repose she keeps the story rolling merrily along. anita l. burkam

Booklist 11/1/05 Starred
Gr. 811. How well word-mage Pierce understands what her audience wants, and how ably she provides it in this epic postscript to her two Circle quartets. Powers in full flush after stints of wayfaring, precocious ambient mages Daja, Briar, and Tris have finally reunited with left-behind Sandry. But nothing is quite what it was, and the 16-year-olds begin to question their telepathic connection: As adults, we keep our minds and our secrets hidden, and our wounds. It's safer.” It will take a common foe to shake the cobwebs from this partnership. Pierce provides a formidable one in Namorn's charismatic empress, who does battle with silken weapons of courtly politics to compel the mages to live and serve in Sandry's native land. Subplots deepen characterizations in ways reflective of the teens' increasing maturity: Daja discovers she is a woman who loves women”; Sandry must confront her high-born heritage and stave off forced marriage by means of an archaic bride-stealing custom. A few threads seem to dangle in ways that cloth-mage Sandry would scorn, but little will deter readers from reveling in the elemental magics, or from sympathizing with the prickly young adults' nostalgia for the easy companionships of childhood. A standalone tour de force, this will gratify series devotees and ensnare new readers for the series. Jennifer Mattson
Kirkus 10/15/05
Tr