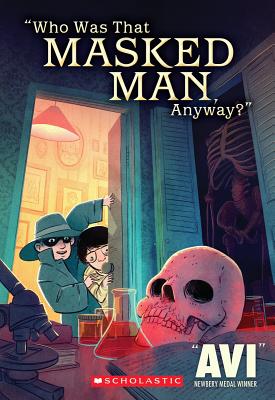 Who Was That Masked Man Anyway?


It's the spring of 1945 in Brooklyn, and while WWII rages in Europe, sixth grader Frankie Wattleson--inspired by the heroics of The Lone Ranger and other radio show idols--sets out to right the wrongs of the world. Frankie is so caught up in his superhero stories that he becomes convinced the tenant renting his brother's room is a mad scientist. Can Frankie and his trusty sidekick, Mario, save the world from an evil genius? Or will Frankie's mother pull the plug on their schemes before they can save the day?

Praise For Who Was That Masked Man Anyway?…

Praise and Reviews for "WHO WAS THAT MASKED MAN ANYWAY?"

* "The characters and the parody are so sharp, the fast-paced scenes so dramatic."--BOOKLIST, starred review

Avi's work spans nearly every genre and has received nearly every major prize, including the Newbery Medal for CRISPIN: THE CROSS OF LEAD and Newbery Honors for NOTHING BUT THE TRUTH and THE TRUE CONFESSIONS OF CHARLOTTE DOYLE. Avi lives in Colorado. You can learn more about him online at www.avi-writer.com.
Loading...
or
Not Currently Available for Direct Purchase