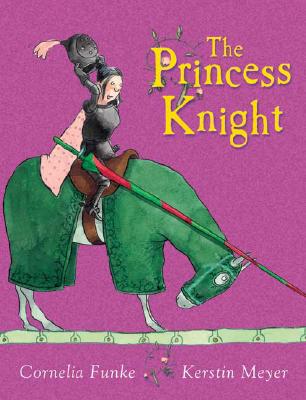 Cornelia Funke, author of the international best-seller THE THIEF LORD, makes her brilliant debut as a picture-book writer with this winning tale of a young princess's adventure
Violet is a young princess who wishes she could show the world that she is just as brave and strong as her brothers. But her strict father insists that she get married, and her brothers only mock her when she wants to be included in their fun. So Violet decides to use her intelligence and bravery to show everyone--once and for all--what she's made of. Disguising herself as a boy, Violet takes part in a knights' jousting tournament. When she wins the contest, she reveals her true identity--and wins the prize of freedom


Praise For The Princess Knight…

PreS-Gr 2-King Wilfred teaches his daughter the same knightly skills he has taught his three sons. Mocked by her brothers for being smaller and weaker, Violetta grows more determined to succeed. She creeps out at night to practice her sword fighting and horseback riding. With perseverance, the "nimble and quick" Princess becomes an expert jouster. In honor of her 16th birthday, the king announces a tournament with the victory prize being her hand in marriage. Outraged and appalled, Violetta cries: "You want me to marry some dimwit in a tin suit? Just look at your own knights! They whip their horses and they can't even write their own names!" Taking matters into her own hands, she disguises herself in armor and poses as "Sir No-Name." After defeating the other contenders, she reveals her true identity and chooses her prize-independence. Meyer's ink-and-watercolor illustrations run across the pages in panels and were inspired by the Bayeux Tapestry. Children will pore over the medieval details. Pair this spirited tale with Robert Munsch's The Paper Bag Princess (Turtleback, 1980) for a discussion of gender stereotypes.-Linda Ludke, London Public Library, Ontario, Canada Copyright 2004 Reed Business Information.

PreS-Gr. 2. The author of The Thief Lord (2002) follows up her second novel, Inkheart BKL S 1 03, with a picture book that will instantly begin appearing on "Strong Girl Protagonist" book lists. Happily, this is so well done that it's likely to win over children who normally prefer their princesses without the revisionist twist. Raised by a widowed king, Princess Violetta is put through the same paces (swordplay, riding, jousting) as her older, brawnier brothers. Her practice pays off when her father holds a tournament--with Violetta as the grand prize--and she handily scuttles his plans. Bell translates Funke's story from the German with aplomb ("You want me to marry some dimwit in a tin suit?"), and Meyer's effervescent line-and-watercolor artwork, as funny as it is lovely, stretches across each spread in horizontal strips--a droll homage to the Bayeux Tapestry. This jaunty parable offers children an endearing, indomitable character along with a lesson in girl power. For a gently feminist storytime, pair it with other tales of assertive princesses, such as that oldie but goodie, Robert Munsch's The Paper Bag Princess (1980), oratherine Paterson's Theing's Equal (1992), for somewhat older children. --Ray Olson Copyright 2004 Booklist

Funke (The Thief Lord; Inkheart) handles the picture book form just as deftly as her novels, with sure-footed pacing and a well-placed thrust through the cardboard princess stereotype. Violetta's widowed father King Wilfred has some confused ideas about gender; he insists she learn to joust with her three brothers. At first, she can hardly lift a sword, but after much clandestine practice, Violetta can outride and outfight all her siblings. However, when she turns 16, the king arranges a tournament and says Violetta must marry the winner. "What!" she protests, "You want me to marry some dimwit in a tin suit?" Her father locks her up for her impertinence. Her youngest brother assures Violetta that he'll win and save her, but she demurs: "Thank you... but I think I'd better just see to it myself." Funke delivers a surprise ending that confirms her wit and her feminist leanings. German artist Meyer's friendly-looking ink-and-wash figures loiter, gallop, shout, and don and doff armor in Bayeaux-style tapestry panels that stretch across the spreads. The artist infuses the early drawings with just enough humor for readers to retain their sympathy for the buffoon-like brothers until they can redeem themselves through their later action

Cornelia Funke is the internationally acclaimed, bestselling author of The Thief Lord, Dragon Rider, and the Inkheart trilogy, along with many other chapter and picture books for younger readers. She lives in Los Angeles, California, in a house filled with books.

Kerstin Meyer is the award-winning illustrator of Pirate Girl and The Princess Knight, a story of young Princess Violetta who wants to be treated by her older brothers who are training to be knights. Kerstin lives in Hamburg, Germany.
Loading...
or
Not Currently Available for Direct Purchase