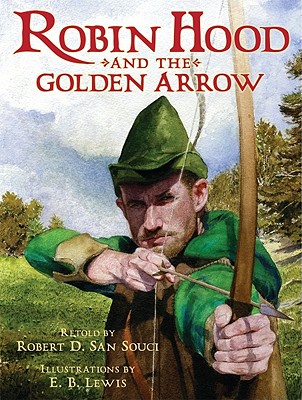 Robin Hood and the Golden Arrow

Robert San Souci retells the classic and humorous tale of Robin Hood and the Golden Arrow.

Acclaimed author Robert San Souci and Caldecott Honor illustrator and Coretta Scott King Award winner E. B. Lewis retell the classic legend of Robin Hood and the Golden Arrow.
Robin Hood and his loyal band create a plan to outsmart the Sheriff of Nottingham by attending an archery contest in disguise. In the end, it is Robin Hood and his friends who have the last laugh.
Kids of all ages will cheer for this classic tale based on the traditional story of Robin Hood.

Robert D. San Souci is the author of more than sixty-five picture books and story collections for young readers, including The Reluctant Dragon, illustrated by John Segal, a retelling of Kenneth Graham s classic, as well as The Talking Eggs, illustrated by Jerry Pinkney, and The Faithful Friend, illustrated by Brian Pinkney, both Caldecott and Coretta Scott King Honor Books. His other accolades include two Aesop Awards from the Children s Folklore Section of the American Folklore Society, two Commonwealth Club of California Silver Medals, and numerous other awards. A lifelong resident of California, he lives in the San Francisco Bay Area.

E. B. Lewis Won a Caldecott Honor for COMING ON HOME SOON by Jacqueline Woodson. He has also won the Coretta Scott King Award and Coretta Scott King Honor three times. He graduated from Temple University's Tyler School of Art and now teaches at the University of the Arts in Philadelphia. Mr Lewis lives in Folsom, New Jersey. Visit www.eblewis.com to learn more."
Loading...
or
Not Currently Available for Direct Purchase