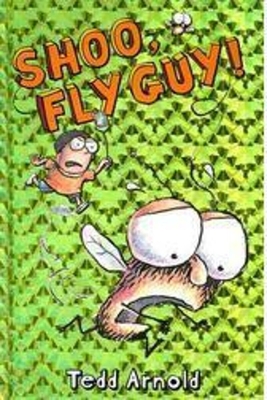 The third book in a humorous, easy-to-read series about a boy and his fly! Each book in the series has a different fun foil cover!

Fly Guy returns home to discover that Buzz has gone on a picnic without him! Sad and hungry, Fly Guy takes off in search of his favorite food. He gets shooed away from a hamburger, a pizza, a dog's bones, and even roadkill--leaving readers to guess what Fly Guy's favorite oozy, lumpy, smelly, and brown food could possibly be! Why, it's shoo-fly pie, of course!

Using hyperbole, puns, slapstick, and silly drawings, bestselling author/illustrator Tedd Arnold creates an easy reader that is full of fun. With an eye-catching holographic foil cover, this is the third in a series of four books.

Tedd Arnold is the author and illustrator of the bestselling Fly Guy series and the illustrator of more than 60 books, including DETECTIVE BLUE. He has received Theodor Seuss Geisel Honors for HI! FLY GUY and I SPY FLY GUY! Tedd lives with his wife, Carol, in upstate New York.

Kirkus
Buzzy Fly Guy's on his own for most of his third outing. Returning from a foray past garbage, a horse and other intriguingly scented landmarks, Fly Guy finds a note that his human buddy Buzz and family have gone off for a picnic. Away he flies in pursuit—both of Buzz, and of his favorite food, which is "brown, oozy, lumpy and smelly." Being a fly, he is of course willing to settle for any one of those qualities, but the tempting burger, pizza slice, bones and roadkill he finds are already claimed. Poor Fly Guy, shooed away from every snack. Arnold's cartoons are more pop-eyed than ever in this simply told, medium-gross episode, and emergent readers will enjoy following the muscid marauder to final nirvana atop a slice of—yes, shoo-fly pie: brown, oozy, lumpy and smelly. (Easy reader. 5-7)

SLJ
K-Gr 2–Fly Guy is back for his third adventure in this rollicking series. This time, the unusual pet is exploring on his own while his owner, Buzz, has gone on a picnic. Fly Guy is searching for something good to eat. Readers are told that his favorite food is “brown, oozy, lumpy, and smelly.” His first find isn't “oozy, lumpy, or smelly. But it was brown. Close enough!” Then the boy who is about to eat the hamburger shoos him off, and Fly Guy must look again. The scene repeats as the exuberant bug finds other “close enough” foods and gets shooed away. At last, he finds the perfect brown, oozy, lumpy, smelly food and is reunited with Buzz. This book has tons of kid appeal, as beginning readers follow the small hero through the zippy, funny story. Clear, bright pictures are surrounded by lots of white space, and the large block letters in a casual font are easy to read. Simple sentences with repetition reinforce reading skills in a humorous way. This delightful book is guaranteed to fly off library shelves.–Martha Simpson, Stratford Library Association, CT