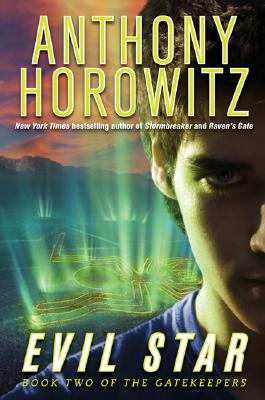 Matt thought his troubles were over when he closed Raven's Gate . . . but in fact they were just beginning. His fate -- and the fate of the world -- is tied to four other kids across the globe. The second is a street kid in Peru. He and Matt have never met; they don't even speak the same language. But destiny is going to throw them together as the evil threat of the Old Ones grows . . . and another Gate suddenly comes into play.

Kliatt This sequel to Raven's Gate (a 2006 ALA Quick Pick for Reluctant Readers) won't disappoint fans to this exciting new supernatural series from the popular author of the Alex Rider books. Fourteen-year-old Matt's adventures mainly take place in Peru this time as he tries to thwart the plans of an evil businessman to open a gate to let the manacing Old Ones into the world and unleash a new world war. The discovery of a 16th-century diary by a Spanish monk gives clues to the location of this gate, while Matt's dreams lead him to recognize another young gatekeeper, Pedro. Descendants of the Incas help the two in their daring escapes from the bad guys, and the mysterious real-life Nazca Lines in the Peruvian desert play an important role. Lots of action, horror and suspense will keep readers turning the pages and eager for the next volume in this thrilling series.

Booklist
Gr. 5–8. Fourteen-year-old Matt Freeman, who forestalled the evil Old Ones in the riveting Raven's Gate (2005), finds himself on yet another precipitous adventure. This time Matt and Richard, the journalist with whom Matt has been staying, travel to Peru, where Nexus believes a second gate to the underworld is poised to open. The when and how of the event are left to Matt to discover, which he eventually does, but not without some lugubrious descriptions, an abundance of dramatic escapes, and the help of a Peruvian teen, Pedro, with whose destiny Matt's is linked. Although this is neither as tightly constructed nor as compelling as the lead title in the Gatekeepers Series (which was equal parts horror and adventure), this book still has its moments, especially at the end, when the secret of the second gate is revealed, and Pedro finally settles into his place as the second of the children prophesied to save the world. ––Stephanie Zvirin

Kirkus Matt Freeman, hero of Raven's Gate (2005), returns for another supercharged adventure tale from a master of the trade. In this sequel, Matt leaves England, meets Pedro, the second of the gatekeepers, and attempts to prevent an evil ancient god from reaching earth through a gate in the Peruvian desert. Sustained suspense beginning in the prologue and doesn't let up, providing for a compulsive read. Danger abounds for the two boys. Dead bodies line the paths they travel. Plenty of gore—gently described—place this in the Indiana Jones genre of adventure tale. Lots of cool details sustain interest; among them are the boys' mystical mental powers, golden treasure hidden in the walls of Cusco and a visit to the lost city of the Incas. As in some plot-driven stories, stereotypes provide an easy shortcut. Horowitz, however, does reverse some roles—in this case, the Incans are the good guys. The climax, littered with dead heroes and villains alike, guarantees a suspenseful start for the next installment. Bring on gatekeeper number three—soon. (Fiction. YA)

SLJ
HOROWITZ, Anthony. Evil Star. 318p. (The Gatekeepers Series). CIP. Scholastic. 2006. Tr $17.99. ISBN 0-439-67996-6. LC 2005022135.
Gr 5-8–Though this is the second installment in this series, new readers will catch on quickly. Fresh from his victory over Raven's Gate, Matt is once again called upon by the mysterious Nexus. As one of the five kids foretold by prophecy to fight back the Old Ones, the 14-year-old is needed in South America. From the very beginning, his enemies seem to always be one step ahead of him. But these shadowy opponents don't count on Matt's unexpected allies: the second of the five, and an ancient tribe of Inca warriors. While the story and characters are not particularly original, and more experienced readers will not be glued to their seats, the plot turns and emotional relationships will more than satisfy thrill seekers, especially those already into Horowitz's “Alex Rider” series (Philomel). A must-have for reluctant, middle-grade boys.–Morgan Johnson-Doyle, Sierra H