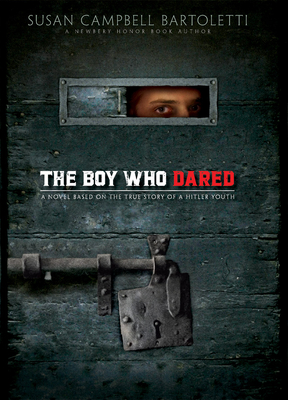 The Boy Who Dared (Hardcover)

A Newbery Honor Book author has written a powerful and gripping novel about a youth in Nazi Germany who tells the truth about Hitler.
Susan Campbell Bartoletti has taken one episode from her Newbery Honor Book, Hitler Youth, and fleshed it out into thought-provoking novel. When 16-year-old Helmut Hubner listens to the BBC news on an illegal short-wave radio, he quickly discovers Germany is lying to the people. But when he tries to expose the truth with leaflets, he's tried for treason. Sentenced to death and waiting in a jail cell, Helmut's story emerges in a series of flashbacks that show his growth from a naive child caught up in the patriotism of the times , to a sensitive and mature young man who thinks for himself.

Susan Campbell Bartoletti is the award-winning and critically acclaimed author of many fiction and nonfiction books for children. Her fiction includes the novels The Boy Who Dared, Dear America: A Coal Miner's Bride, and No Man's Land, as well as a number of picture books. She won the Newbery Honor for her nonfiction book Hitler Youth. A former eighth-grade teacher for 18 years, Bartoletti now writes full-time and lives in Pennsylvania with her family.

Praise For The Boy Who Dared…

Awards and Praise for The Boy Who Dared:
A YALSA Best Book for Young Adults
A Booklist Best Books for Young Adults
A Booklist Editors' Choice
A 2009 Notable Book for a Global Society
An NCSS Notable Social Studies Trade Books for Young People
* "The teen's perspective makes this a particularly gripping way to personalize the history, and even those unfamiliar with the background... will be enthralled by the story of one boy's heroic resistance in the worst of times... This is an important title for the Holocaust curriculum." -- Booklist, starred review
"[An] inspiring tale of conscience and courage." -- Kirkus Reviews
"Bartoletti offers another perspective on the Holocaust, demonstrating that even if the effort proves unsuccessful, the courage and convictions of a minority should be motivation to speak the truth rather than remain silent. It's a message that must be continually emphasized as a lasting legacy of the Holocaust." -- School Library Journal
"A stirring tale of one young man's resistance to a government he came to regard as evil... The character development, based on research and interviews with those who knew Helmuth, is solid, and the author excels in creating a sense of immediacy in the setting. Her Nazi Germany is a place that is hauntingly familiar, enveloped in a government-fed sense of fear in this welcome addition to a body of literature begun with Anne Frank's diary." -- VOYA
"Bartoletti accomplishes the seemingly impossible task of building dramatic tension in a story whose outcome we know from page one. Helmuth s questioning voice lives on in the pages of this compelling work." -- Cooperative Children's Book Center, recommended

Returning to material she uncovered while researching Hitler Youth, Bartoletti offers a fictionalized biography of Helmuth H\u00fcbener, a Hamburg teenager who, in February 1942, was arrested for writing and distributing leaflets that denounced Hitler. Almost nine months later, on October 27, at the age of 17, H\u00fcbener was executed for treason. Opening her story on H\u00fcbener's last day, Bartoletti frames the work as third-person flashbacks, casting over the narrative a terrible sense of doom even as she escalates the tension. She does an excellent job of conveying the political climate surrounding Hitler's ascent to power, seamlessly integrating a complex range of socioeconomic conditions into her absorbing drama of Helmuth and his fatherless family. The author also convincingly shows how Helmuth originally embraces Hitler. His disillusionment seems to come a little too easily; American readers may wonder why Helmuth's reactions were not more common. But that question resolves itself as the author exposes the chilling gap between her own admiration for her subject and reflections, discussed in an afterword, from those who knew Helmuth, as in this comment from his older brother: \u201cHe should have known better than that.... A sixteen-year-old boy cannot change the government.\u201d Ages 11-up. (Feb.)