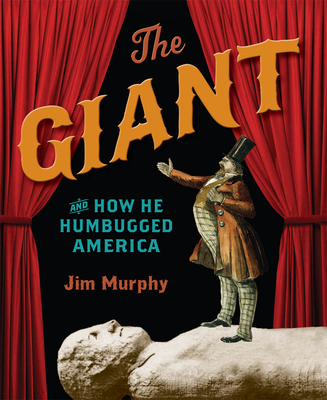 The Giant and How He Humbugged America

When a 10-foot tall purported "petrified man" is unearthed from a backyard in upstate New York in 1869, the discovery immediately turns into a spectacle of epic proportions. News of the giant spreads like wildfire, and well over a thousand people come to view him in the first five days alone!

Everyone has their own idea of his true origin: Is he an ancient member of the local Onandaga Indian tribe? Is he a biblical giant like Goliath? Soon the interests of world-renowned scientists and people from around the globe are piqued as arguments flare over who he is, where he came from, and if he is real--or just a hoax.

In a riveting account of how the Cardiff Giant mystery snowballed into one of America’s biggest money-making spectacles--and scams--Jim Murphy masterfully explores the power of 19th-century media and the unexpected ripple effect that a single corrupt mastermind can produce when given a stage.

Praise For The Giant and How He Humbugged America…

Jim Murphy is the celebrated author of more than thirty-five books for young readers, most notably TRUCE: THE DAY THE SOLDIERS STOPPED FIGHTING and THE GREAT FIRE, a Newbery Honor Winner. His carefully researched, engaging, and elegantly written nonfiction has garnered the most prestigious awards in the field. He lives in Maplewood, New Jersey, with his wife and their two sons.
or support indie stores by buying on