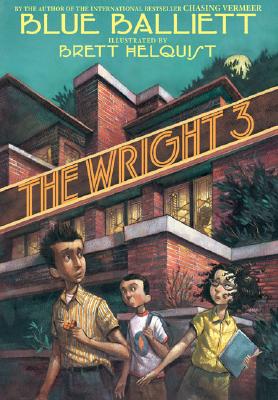 Spring semester at the Lab School in Hyde Park finds Petra and Calder drawn into another mystery when unexplainable accidents and ghostly happenings throw a spotlight on Frank Lloyd Wright's Robie House, and it's up to the two junior sleuths to piece together the clues. Stir in the return of Calder's friend Tommy (which creates a tense triangle), H.G. Wells's The Invisible Man, 3D pentominoes, and the hunt for a coded message left behind by Wright, and the kids become tangled in a dangerous web in which life and art intermingle with death, deception, and surprise.


Praise For The Wright 3…

Booklist 2/1/06*BOX*
Gr. 58. How many newsworthy art crimes can 12-year-old sleuths thwart in a single year? At least two, as readers will discover in this sequel to Balliett's celebrated Chasing Vermeer (2004). After all, magical coincidences” are what these thinking-kids' adventures are all about. Tommy Segovia, the best friend Calder corresponded with during the Vermeer crisis, has returned to Hyde Park, and he resents Petra and Calder's tight twosome. But when a house by Frank Lloyd Wright is slated for destruction, the sixth-graders overcome tensions to save the landmark and decode its secretsamong them, an intriguing buried artifact. Leapfrogging connections and mystical messages from Calder's pentominoes once again drive the plot, but some children may find this second installment more arcane than the first, with too much focus on Wright and his genius, difficult-to-follow gleanings from sources as eclectic as H. G. Wells' Invisible Man and Fibonacci, and a central problem that lacks the glamorous hook of an international art heist. But determined fans will grab hold of the true-to-life friendship issues Balliett introduces, and manyparticularly her brainiest, most open-minded readerswill emerge energized by the invitation to explore themes of an interconnected universe. A new pentominoes code appears in the narrative, and Helquist likewise embeds another challenge in his drawings (unfinished in the galley). Jennifer Mattson

VOYA
Tommy, who went missing in Chasing Vermeer, has moved back to his old neighborhood in Chicago and things have changed. His best friend, Calder, has a new friend, a girl named Petra, and exciting things happened while Tommy was gone. Miss Hussey, the sixth grade teacher, seems a little strange, but the students all pay attention to her. The announcement that the Frank Lloyd Wright Robie House, right down the street, is to be dismantled and displayed in different museums becomes the lynchpin for another exciting art adventure. Although Tommy tries to be friends with Calder and Petra, his resentment frequently puts him on a solo path and also caused problems between Calder and Petra.
Each character has a distinct personality and approach to problem solving. Petra finds a copy of the Invisible Man that has a strange relationship to the goings on; Tommy- who lives next to the house- unearths a fish-shaped object on the grounds where he should not have been. Calder's pentominoes seem to be giving him messages. There are lights in the house. As the mystery develops and more resources are needed to save the house, Tommy, Petra, and Calder's complimentary abilities move toward solutions and success. While learning about the Robie House, they develop their art appreciation, a sense of history, civic responsibility, take some risks, and eventually all become friends. This installment is a worthy follow-up and provides a wonderful opportunity for young readers to think about buildings as art.

Kikus Starred The determined sleuths from Balliett' s fine first novel, Chasing Vermeer, return in another mystery, centered on one of Chicago's architectural treasures. As sixth grade wanes, the vibrant Ms. Hussey reveals heartbreaking news: Because of the extraordinary costs of maintenance and repair, Frank Lloyd Wright's Robie House, a city icon since 1910, will be dismantled in sections and donated to four museums. While the class's spirited campaign to save the building ends with the school year, the passionately curios Petra and Calder press on, abetted by Calder's good friend Tommy, just back from a traumatic year away. The shifting third-person narrative effectively captures the children's tense struggle to transform from duo to trio, and transmits their shared delight in puzzling, excavating and thinking deeply, creating a similarly heightened alertness in the reader. The Wright 3” take increasingly bold risks to recover a stolen, priceless

Brett Helquist was born in Ganado, Arizona, and grew up in Orem, Utah. He entered Brigham Young University as an engineering major, but soon realized this was not the right choice for him. Having decided to take time off from college, he headed to Taiwan where he stumbled into a job illustrating English textbooks, which he enjoyed. There, a friend introduced him to an illustration student, also from Brigham Young University. This introduction inspired Brett to eventually switch majors. After spending a year in Taiwan, he went back to BYU and transferred to the illustration department. In 1993 he received a fine arts degree in illustration.
Loading...
or support indie stores by buying on
(This book is on backorder)