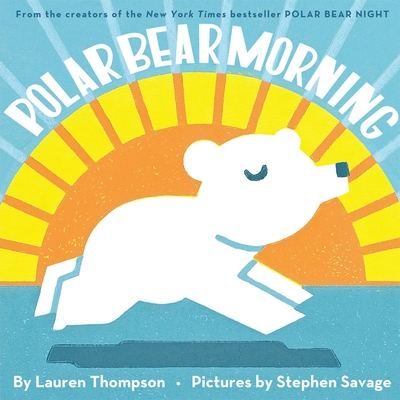 On a chill, bright morning, a polar bear cub awakes inside her cozy den. She hears the seagulls' far-away calls and clambers out into the day.

Suddenly a snowy something tumbles down a little snow hill. She sees a snowy face, snowy paws, and snowy fur. What can it be?

Thrilling words and glowing pictures make this morning-time tale of first friendship as satisfying as a warm hug.

Lauren Thompson is the author of several New York Times bestselling children's books, including the much-beloved Little Quack series and the award-winning picture book POLAR BEAR NIGHT. She is also the author of THE APPLE PIE THAT PAPA BAKED and BALLERINA DREAMS: A TRUE STORY. She lives in Brooklyn, New York, with her husband, Robert, and their son, Owen. You can visit her website at www.laurenthompson.net.


Stephen Savage is the New York Times bestselling illustrator of the highly acclaimed and award-winning picture book POLAR BEAR NIGHT, written by Lauren Thompson, as well as the creator of WHERE'S WALRUS? He creates illustrations for a wide range of publications, including The New Yorker, the New York Times, and Newsweek. Stephen lives in Brooklyn, New York, with his wife and their daughter.


"A new year, a new day. For very young children, there really isn’t much difference. Each morning seems to bring a whirlwind of emotion and possibility, hope and disappointment. And it takes a good long while to get to bedtime. Three new picture books honor the boundaries, as so many picture books do, of the 24-hour lifetimes of young children.“Polar Bear Morning” is a sequel of sorts to the previous collaboration between Lauren Thompson (“The Forgiveness Garden,” “The Christmas Magic”) and Stephen Savage (“Where’s Walrus?,” “Little Tug”). Their previous effort, “Polar Bear Night,” was a bedtime story about a cub wandering outside at night, observing his sleeping neighbors and a star shower before taking to bed himself. This new book likewise features the pure simplicity of Savage’s near-monochromatic linocut illustrations, beginning with the icy blues of early dawn before bursting into the warmer brights of polar sunshine. And “Polar Bear Morning,” like its predecessor, is a real charmer.Just as “Night” captivated with its hushed solemnity, so “Morning” captures the excitement of daybreak — the need to “clamber” out of bed, scamper into the “sparkling snow” and gleefully tumble down a little hill. Thompson’s text is a concise approximation of preschool vernacular, though lighted by poetry. The words, which tell a modest story of burgeoning friendship and two bears swept along by childhood exploration, join in buoyant harmony with Savage’s soft lines and gentle forms. The image of the two new friends diving side by side, eyes blissfully closed, as they leap into the polar sea perfectly encapsulates the bliss of the young at play.In Neil Gaiman’s “Chu’s Day,” a very different bear, this time a panda, begins his day on a foreboding note. “When Chu sneezed, bad things happened,” the first page tells us. Can a popular YouTube video motif inspire a picture book? Quite possibly, though Gaiman doesn’t explicitly identify his source material.But as soon as Chu and his mother enter a musty, dusty library, we know panda sneezes are in order. The hows and whens and whys provide the substance of this slight tale, which is enriched primarily by the sly humor in Adam Rex’s deeply hued oil paintings. At the Moby Diner, for example, a whale plays short order chef to an octopus, a monkey and a turtle, and a kangaroo carelessly wields a pepper grinder. Uh oh. “Are you going to sneeze?” Chu’s father asks. It becomes a refrain. To which Chu replies, “Aah, Aaaah, Aaaaah — no.”You can bet that when Chu finally does sneeze, it comes at an unexpected and inopportune moment — and shows Gaiman’s keen understanding of a 5-year-old’s comedic sensibility. “Chu’s Day” is the first in a planned series of three about Chu. (Time to Google “panda yawning”?)Steve Jenkins and Robin Page have already done yawning in one of their many collaborations, “Time to Sleep.” That book and a companion, “Time to Eat,” provide the rough format for the smart, informative and accessible “My First Day,” as the team offers a glimpse into the very first day of newborn animals, whether a sifaka, a capybara or a California sea lion. (As usual, the two venture far from the expected menagerie, though they are careful to include favorites like tigers and penguins.)Jenkins’s masterly paper collages achieve their usual high standards of zoological accuracy and beauty. The text is shrewdly written in the first-person voice of each baby animal, mingling personality with scientific fact. The baby blue wildebeest notes, “On my first day, I trotted along with my mother. My herd was on the move, and I had to keep up!” The voices give expression to the ideas and emotions of human children while also being true to the animals in question. The barking between a baby sea lion and his mother, for example, assures the baby that “I won’t get lost among the other sea lion pups.”The analogies with a young child’s physical achievement and independence are clear, and inspiring. “On my first day, I raced to the water,” a baby leatherback turtle boasts. “I landed in a heap,” the baby giraffe admits. “But I wasn’t hurt, and before long I was taking my first steps.”Children will likewise respond to the warm relationship between parent and offspring. “I clung to her fur as she slept,” a golden snub-nosed monkey says of his large, orange-furred mother. The story ends, sweetly, with a polar bear who practically purrs, “I curled up in a cozy den beneath the snow. I was safe and warm beside my mother.” The full spread of his silhouette nestled against hers is one of pure filial joy. What a fine way to start, or end, the day. " - Pamela Paul, New York Times

"Thompson and Savage follow up Polar Bear Night (2004) by giving the polar bear cub from the first book another chance to explore her surroundings, as well as make a new friend. Savage’s linocuts, with their round shapes and creamy sunrise palette of pinks and blues, are once again showstoppers (a spread in which the bear and her new friend enjoy a perfect quiet moment under the sea is especially nice), while Thompson’s restrained prose conveys plenty about the pleasures of companionship." - Publishers Weekly starred review

“This bedtime story will captivate young listeners; it sparkles just like ice crystals on a moonlit night.”–Kirkus Reviews

Santa and the Christmas Magic

“…this gentle and lovely book is sheer enchantment.”–School Library Journal

Named a Best book of the year by:

Bulletin of the Center for Children's Books (A Blue Ribbon book)

“The walrus' delicately absurd mimicry provides plenty of point-and-giggle moments in this understated but considerably charming bit of irreverence.”–Booklist