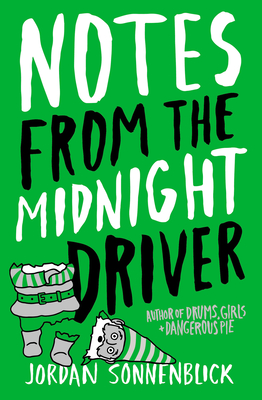 Notes From The Midnight Driver

"Alex Peter Gregory, you are a moron!” Laurie slammed her palms down on my desk and stomped her foot. I get a lot of that.

One measly little car crash. And suddenly, I’m some kind of convicted felon.

My parents are getting divorced, my dad is shacking up with my third-grade teacher, I might be in love with a girl who could kill me with one finger, and now I’m sentenced to babysit some insane old guy.

What else could possibly go wrong?

This is the story of Alex Gregory, his guitar, his best gal pal Laurie, and the friendship of a lifetime that he <i>never</i> would have expected.

Praise For Notes From The Midnight Driver…

"A brave book . . . Jordan Sonnenblick carries it off with such charm and elan, you forget for a moment your heart is breaking." --Frank McCourt, author of Angela’s Ashes

* "Sonnenblick shows that even in the midst of tragedy, life goes on, love can flower, and the one thing you can always change is yourself." --Booklist, starred review

"The reader falls in love with the brothers, laughing and crying by turns and rooting for both of them until it almost hurts." --Kirkus Reviews

Praise for After Ever After :

* “As hilarious as it is tragic, and as honest as it is hopeful, don’t confuse this book with inspirational reading. It’s irresistible reading.” --Booklist, starred review

Praise for Curveball: The Year I Lost My Grip:

“Jordan Sonnenblick scores a home run with Curveball as he continues what he does best: getting to the core of issues that resonate with teens in a style that’s direct and witty.” --Book Page

* “Sonnenblick again shows an adept ability to tackle big-deal life issues, treat them seriously and believably, and filter them into a high-spirited, even fun story.” --Booklist, starred review

* “The novel is populated with kind, vulnerable characters who care about each other, and the thoroughly enjoyable mix of sports, art, family drama, and budding romance will have readers invested in Peter’s struggles to accept his new world…” --Publishers Weekly, starred review

Praise for Notes from the Midnight Driver:

* “Readers [will be] nodding with recognition, sighing in sympathy, and gasping with laughter--often on the same page.” --The Horn Book, starred review

Praise for Zen and the Art of Faking It:

“This light-hearted situation comedy is peppered with genuine Zen insight.” --Bulletin of the Center for Children’s Books

“The writing is fresh, the characters appealing, and it looks like the author has another hit.” --Oakland Tribune

Jordan Sonnenblick is the author of the acclaimed DRUMS, GIRLS, & DANGEROUS PIE, NOTES FROM THE MIDNIGHT DRIVER, ZEN AND THE ART OF FAKING IT, and the sequel to DRUMS called AFTER EVER AFTER. He lives in Bethlehem, Pennsylvania, with his wife and two children.
or support indie stores by buying on