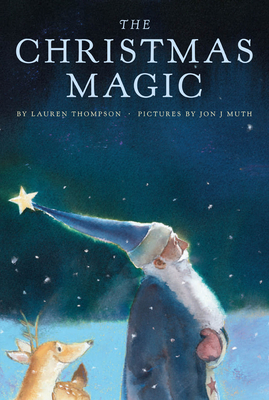 “A gentle, sweet story of Santa as he waits for the Christmas magic. The pictures match the text perfectly, in a way that only Jon J Muth could manage. This one belongs on the shelf next to your The Night Before Christmas.”
— Katherine Fergason, Bunch of Grapes Bookstore, Vineyard Haven, MA
View the List

Best-selling author, Lauren Thompson, and Best-selling Caldecott Honor Book artist Jon J Muth join forces to present a story that is filled with the magic, wonder, and love of Christmas.Far, far North, when the nights are longest and the stars shine brightest, Santa begins to prepare for his big night of giving. He gathers his reindeer, feeds them parsnips and berries, and polishes his bells and his sled. Then lovingly, he chooses toys for every child in the world. For Santa loves them all, and he knows what each child at heart wants most. Then, with the thrum of magic that makes reindeers fly, he spreads the Christmas joy and warmth throughout the world--as he always has -- and always will until the end of time.

Lauren Thompson is the author of many beloved picture books, including the New York Times bestseller Polar Bear Night, its companion Polar Bear Morning, and The Christmas Magic. She is also the author of the popular Little Quack and Mouse's First series. She lives in Brooklyn, New York, with her husband and their son. Visit her online at laurenthompson.net.
Jon J Muth is beloved all over the world for his seven books featuring Stillwater the Panda, whose love and balanced approach to life always serve to make the world a better place for his young friends. Muth’s many enchanting picture books include his Caldecott Honor Book Zen Shorts, Addy’s Cup of Sugar, Stone Soup, and The Three Questions, which the New York Times Book Review called "quietly life-changing." His books have been translated into more than 23 languages and are cherished by readers of all ages. Muth draws inspiration from his life-long interest in Asian Studies, including tai chi chuan, sumi ink drawing, and chado, "the way of tea." Muth is also renowned in the world of graphic novels. He won an Eisner Award for his paintings in the graphic novel, The Mystery Play by Grant Morrison. He’s partnered with Neil Gaiman on The Sandman: The Wake, Walter and Louise Simonson, and Kent Williams on Havoc & Wolverine: Meltdown, J. M. DeMatteis on Moonshadow and Silver Surfer, and with Stanislaw Lem on The Seventh Voyage which was nominated for an Eisner Award for Best Adaptation in Another Medium. He lives in New York State with his wife and their four children.
Loading...
or support indie stores by buying on