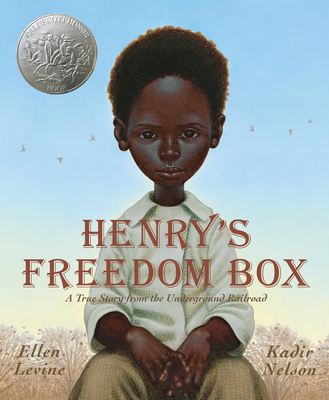 A stirring, dramatic story of a slave who mails himself to freedom by a Jane Addams Peace Award-winning author and a Coretta Scott King Award-winning artist.

Henry Brown doesn't know how old he is. Nobody keeps records of slaves' birthdays. All the time he dreams about freedom, but that dream seems farther away than ever when he is torn from his family and put to work in a warehouse. Henry grows up and marries, but he is again devastated when his family is sold at the slave market. Then one day, as he lifts a crate at the warehouse, he knows exactly what he must do: He will mail himself to the North. After an arduous journey in the crate, Henry finally has a birthday -- his first day of freedom.

Kirkus Starred
Nelson's powerful portraits add a majestic element to Levine's history-based tale of Henry “Box”
Brown, a slave who escaped by having himself mailed to freedom in a crate. Depicted as a solemn boy
with an arresting gaze on the cover, Henry displays riveting presence in every successive scene, as he
grows from child to adult, marries and is impelled to make his escape after seeing his beloved wife and
children sold to slaveowners. Related in measured, sonorous prose that makes a perfect match for the art,
this is a story of pride and ingenuity that will leave readers profoundly moved, especially those who may
have been tantalized by the entry on Brown in Virginia Hamilton's Many Thousand Gone: African
Americans from Slavery to Freedom (1993). (afterword, reading list) (Picture book. 8-10)

How did people escape on the Underground Railroad? What was it like to land on Ellis Island?How did it feel to travel the Oregon Trail in a covered wagon? Ellen Levine has revealed worldsof fascinating adventure with her nonfiction books for young readers.

Although Ellen Levine enjoys reading and writing fiction, most of her books for young readershave been nonfiction. “Writing nonfiction lets me in behind the scenes of the story. I enjoylearning new things and meeting new people, even if they lived 200 years ago.”

“Real heroes,” Levine says, “aren't necessarily on TV or in the news. They can be ordinarypeople who are willing to take risks for causes they believe in. Nonfiction offers a way tointroduce young readers to real people who have shown tremendous courage, even when facedwith great danger. All of us have the potential. And one doesn't have to be a grown-up,” sheadds.

When she's not writing, Levine likes to share the excitement of research and the importance ofaccuracy with young readers. “Many young people think research is dull; you go to anencyclopedia, copy information, give it a title, and call it a report.” Using her books asexamples, Ellen explains how to get other, more interesting information. “I may not mention theexact words, but I talk to young people about primary and secondary sources. If I'm speakingwith third graders, I ask them, 'Where would I go if I wanted to find out what it's like to be athird grader?' Most will say, 'Read a book.' But when they say, 'Ask a third grader,' I knowthey've understood what I mean by a primary source of inspiration.”

For If You Were an Animal Doctor, for example, Ellen witnessed an emergency operation on acow. While doing research in Wyoming for Ready, Aim, Fire!, her biography of Annie Oakley,she got to hold the gun Ms. Oakley is believed to have shot in the presence of the Queen ofEngland. “It gave me such a strong feeling about this person,” she says. “That's part of research,too.”

Ellen Levine is the author of many acclaimed books, both fiction and nonfiction. Among them:If You Traveled West in a Covered Wagon, If Your Name Was Changed at Ellis Island, I Hate English!, If You Lived at the Time of Martin Luther King, and Secret Missions. Her recent book, Freedom's Children: Young Civil Rights Activists Tell Their Own Stories, was named one of the Ten Best Children's Books of the Year by The New York Times, and Best Book for Young Adults by the American Library Association.


Kadir Nelson illustrated two Caldecott Honor Books: MOSES and HENRY'S FREEDOM BOX. ELLINGTON WAS NOT A STREET by Ntozake Shange won the Coretta Scott King Award. Will Smith’s JUST THE TWO OF US won an NAACP Image Award, and his new book, WE ARE THE SHIP continues to garner major awards. Nelson showed artistic talent at age 3 and began working in oils by age 16. He lives with his family in San Diego, California.
Loading...
or support indie stores by buying on