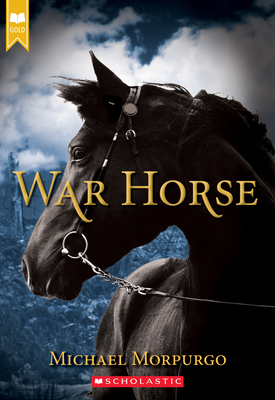 An unforgettable tale of war, redemption, and a hero's journey.It is 1914, and Joey, a farm horse, is sold to the army and thrust into the midst of World War I on the Western Front. When Joey is dragged away, his heart aches for Albert, the farmer's son he is forced to leave behind.In the army the beautiful red-bay horse is trained to charge the enemy, drag heavy artillery, and carry wounded soldiers not much older than Albert off the battlefields. Amongst the clamoring of guns, and while plodding through the cold mud, Joey wonders if the war will ever end. And if it does, will he ever find Albert again?War Horse joins the Scholastic Gold line, which features award-winning and beloved novels. Includes exclusive bonus content!

Michael Morpurgo, former Children's Laureate of Britain, is the author of War Horse, called "Superb" by the New York Times Book Review, and now a major motion picture. His other prize-winning books include Kensuke's Kingdom, Private Peaceful, and The Amazing Story of Adolphus Tips. Michael lives in England, with his wife, Clare. Together, they founded the charity Farms for City Children, which gives children from urban areas an opportunity to spend a week working on a farm. Learn more at michaelmorpurgo.org.
Loading...
or support indie stores by buying on