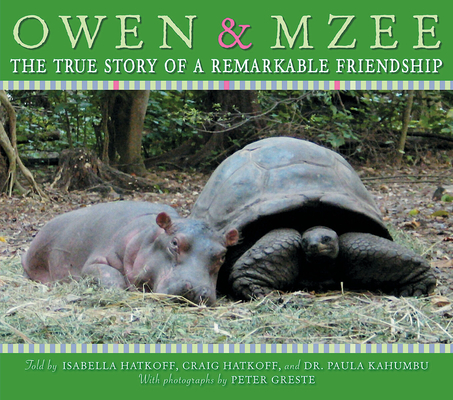 The amazing true story of the orphaned baby hippo and 130-year-old giant turtle whose remarkable friendship touched millions around the world.
The inspiring true story of two great friends, a baby hippo named Owen and a 130-yr-old giant tortoise named Mzee (Mm-ZAY). When Owen was stranded after the Dec 2004 tsunami, villagers in Kenya worked tirelessly to rescue him. Then, to everyone's amazement, the orphan hippo and the elderly tortoise adopted each other. Now they are inseparable, swimming, eating, and playing together. Adorable photos e-mailed from friend to friend quickly made them worldwide celebrities. Here is a joyous reminder that in times of trouble, friendship is stronger than the differences that too often pull us apart.

Peter is an internationally recognized photojournalist and broadcaster for the BBC. He currently lives in Mombasa, Kenya.

Craig Hatkoff is the co-founder of the Tribeca Film Festival and of Turtle Pond Publications. Both Owen & Mzee: The True Story of a Remarkable Friendship and Owen & Mzee: The Language of Friendship are New York Times bestsellers. He lives with his wife and their two daughters in Manhattan.

PW Starred
Remarkable" seems too tame a word for this memorable book about a friendship between two wild creatures. Its genesis lay in Greste's photo of a baby hippo snuggling with a giant tortoise, which appeared in newspapers the month after the cataclysmic 2004 tsunami. Craig Hatkoff and his then six-year-old daughter, moved by that image and by the accompanying article, decided to learn more about these animal companions-and to write their story. They do so succinctly and smoothly, ably aided by Kahumbu, manager of the Kenyan animal sanctuary, Haller Park, where the two creatures now live. Greste's crisp, closely focused photos will instantly endear the title characters to readers. When the tsunami struck Kenya, Owen was separated from his mother and the rest of their pod and became stranded on a coral reef. Several spreads chronicle the hippo's difficult rescue and transport to the sanctuary. Once set loose, he immediately scrambled toward Mzee (the Swahili term for "wise old man"), a 130-year-old Aldabra tortoise: "Owen crouched behind Mzee, the way baby hippos often hide behind their mothers for protection." The unadorned text allows the facts themselves to move readers, making clear how the improbable bond between the now inseparable mammal and reptile has helped resilient Owen recover from his traumatic ordeal. ("Most [wildlife experts] have never heard of a mammal... and a reptile... forming such a strong bond.") Priceless images document the pair swimming together or nuzzling, their rough skins complementing each other. In several of Greste's photos, the two creatures appear to have genuine smiles on their faces. Readers will have the same. Ages 4-8.(Feb.)

K-Gr 5-When the six-year-old contributor to this book saw the photograph documenting the extraordinary friendship between a baby hippo (Owen) and a 130-year-old giant tortoise (Mzee), she persuaded her father to help tell their story. Originally an e-book, the hardcover version begins with images of the duo, whetting readers' appetite and providing reassurance as the potentially disturbing plot unfolds. After a scene depicting a pod of hippos near the Sabuki River in Kenya, the text describes the 600-pound baby's displacement and separation from the group during the 2004 tsunami. Children witness the challenging rescue and meet the knowledgeable staff at an animal sanctuary. From Owen's first approach for protection to Mzee's unexpected tolerance, the photographs, mostly by BBC photojournalist Greste, capture the pair eating, swimming, snuggling, and playing together. Their contentment and peace are palpable. Because it is sensitively structured, with careful choices about what is emphasized and illustrated, the situation does not overwhelm readers. The text and the back matter are brimming with information about the animals, their caregivers, and the locale. This touching story of the power of a surprising friendship to mitigate the experience of loss is full of heart and hope. A worthy complement is Ann Morris and Heidi Larson's glimpse at a human family's loss and recovery in Tsunami: Helping Each Other (Millbrook, 2005).-Wendy Lukehart, Washington DC Public Library
Booklist
Gr. 1-3. Originally published as an e-book, this photo-essay was conceived when Craig Hatkoff and his seven-year-old daughter encountered a newspaper story about a baby hippo orphaned by the 2005 Indonesian tsunami. Parent, child, and a naturalist they consulted are credited as coauthors. The story has a simple, direct appeal: the hippo is dramatically rescued and brought to a Kenyan nature preserve, where it forms a surprising bond with a giant tortoise. Inspirational language about "the power of courage, love, and the preciousness of life" clutters the powerful facts, and not all of the photos are equally crisp and closely cued to the text. But children will nonetheless embrace the story's compelling anthropomorphic elements, thoughtfully framed by the authors, and will exclaim over the images of the winsome baby and its grizzled surrogate parent. Adults hoping to share the story with young readers may find this preferable to Jeanette Winter's picture book inspired by the same story, Mama (2006), which more starkly emphasizes the trauma of the tsunami itself. -Jennifer Mattson
or support indie stores by buying on
Copyright © 2020 American Booksellers Association