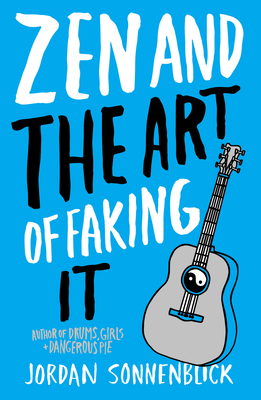 Zen and the Art of Faking It

Meet San Lee, a (sort of) innocent teenager, who moves against his will to a new town. Things get interesting when he (sort of) invents a new past for himself, which makes him incredibly popular. In fact, his whole school starts to (sort of) worship him, just because he (sort of) accidentally gave the impression that he's a reincarnated mystic.
When things start to unravel, San needs to find some real wisdom in a hurry. Can he patch things up with his family, save himself from bodily harm, stop being an outcast, and maybe even get the girl?

Praise For Zen and the Art of Faking It…

Praise for Drums, Girls & Dangerous Pie:
"A brave book . . . Jordan Sonnenblick carries it off with such charm and elan, you forget for a moment your heart is breaking." --Frank McCourt, author of Angela's Ashes
* "Sonnenblick shows that even in the midst of tragedy, life goes on, love can flower, and the one thing you can always change is yourself." --Booklist, starred review
"The reader falls in love with the brothers, laughing and crying by turns and rooting for both of them until it almost hurts." --Kirkus Reviews
Praise for After Ever After:
* “As hilarious as it is tragic, and as honest as it is hopeful, don't confuse this book with inspirational reading. It's irresistible reading.” --Booklist, starred review
* “Sonnenblick's intimate first-person tale of survival . . . will leave an emotional, uplifting imprint.” --School Library Journal, starred review
“Jordan Sonnenblick continues Jeffrey's story in his signature style using an authentic teenage voice and laugh-out-loud humor.” --TeensReadToo.com
Praise for Notes from the Midnight Driver:
* “[A] funny, bittersweet tour de force.” --Booklist, starred review
* “Readers [will be] nodding with recognition, sighing in sympathy, and gasping with laughter--often on the same page.” --The Horn Book, starred review
* “Sonnenblick revisits several key themes from his debut novel, Drums, Girls & Dangerous Pie, to even greater effect here.” --Publishers Weekly, starred review
Praise for Zen and the Art of Faking It:
* “Wildly funny.” -- Kliatt, starred review
“This light-hearted situation comedy is peppered with genuine Zen insight.” --Bulletin of the Center for Children's Books
“Hilarious and heart-wrenching.” --Kirkus Reviews
“The writing is fresh, the characters appealing, and it looks like the author has another hit.” --Oakland Tribune

Jordan Sonnenblick is the author of the acclaimed Drums, Girls & Dangerous Pie, Notes from the Midnight Driver, Zen and the Art of Faking It, and the sequel to Drums called After Ever After. He lives in Bethlehem, Pennsylvania, with his wife and two children.
Loading...
or support indie stores by buying on